Blast from the Past #113: Illustrations for our ad for the Dark Horse miniature lead figures

One of the most exciting things that ever happened in the early days of the TMNT was the introduction, by a company called Dark Horse Miniatures, of a line of very detailed small lead figures of the Turtles and some of their supporting cast. I believe this was our first or second licensing deal (glow-in-the-dark t-shirts may have come first).

This was the first time we'd ever seen our characters rendered in three dimensions, and it was a big thrill. The sculpting was perfect and the poses they chose were excellent. 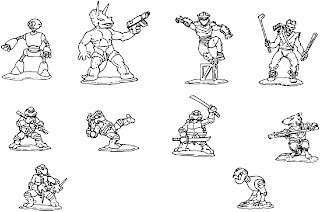 The artwork above is something I drew, using the figures as reference, for an ad we ran in the early TMNT comics in an attempt to sell some of these figures through mail order. I can't remember how many we sold, but in a way it was irrelevant -- I just love the fact that these things existed at all! Dark Horse (not related to the comic book publisher of the same name) went on to do several more variations, including a wicked cool Triceraton in a flying harness, and a bigger Turtle figure (about two inches tall, as I recall). I'm not sure if the company is still in business. -- PL
Posted by PL at 7:24 AM

Email ThisBlogThis!Share to TwitterShare to FacebookShare to Pinterest
Labels: Blast from the Past, Dark Horse, lead, TMNT