Blast from the Past #40 repost: Raphael's new look

This is the last of the proposed redesigns for the unfilmed fourth live-action TMNT movie. One of our ideas was to give Raphael the ability to “morph” into what we were calling “Raptor Raph”, complete with big gnashy teeth and claws to complement his big gnashy personality. 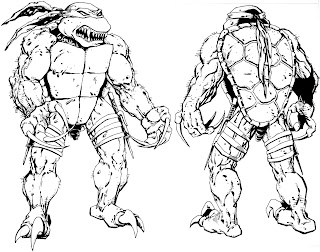 This was not much of a stretch, obviously. In retrospect, while this new approach was probably appropriate for Raph, it was also uncomfortably close to what we were proposing for Splinter.

Years later, during the Volume 4 run of my TMNT comic, I decided to (temporarily) transform Raph into a beastly-looking thing with some similarities to this iteration (minus the "morphing" powers). However, I think the look that Jim Lawson came up with for what some fans call "GameraRaph" is a lot cooler looking than this. -- PL
Posted by PL at 8:24 AM

Email ThisBlogThis!Share to TwitterShare to FacebookShare to Pinterest
Labels: Blast from the Past, conceptual sketches, Raphael, TMNT