Blast from the Past #36 repost: Donatello's new costume

This is one of five pieces which were drawn by me and inked by Kevin (in the late 1990's, I think) as possible new takes on the main characters of the TMNT universe, as part of the development process for the never-filmed fourth live-action TMNT movie. We had put our heads together at the request of the movie studio and came up with some tweaks for the guys -- we were calling it “TMNT: The Next Mutation”. (This was before the live-action TV show.) The general idea was that the mutagen was continuing to change the turtles and Splinter, giving them new abilities -- and new problems. 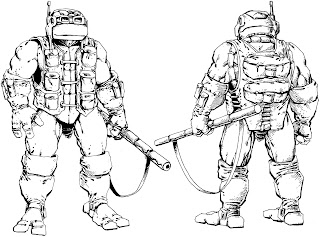 Don was given the least obvious mutation -- growing telekinetic and telepathic abilities, unfortunately counterpointed by diminishing eyesight (hence the vision-enhancing goggles). We also provided him with an updated “techno” version of his bo staff.

Email ThisBlogThis!Share to TwitterShare to FacebookShare to Pinterest
Labels: Blast from the Past, conceptual sketches, Donatello, TMNT