I stopped down at Mirage Studios a couple of days ago to deliver a box full of one hundred copies of TMNT Volume 4 #31, copies which I'd autographed and also within which I had drawn a large Turtle head sketch on the inside back cover.

I decided to lay them all out, with the sketch pages exposed, on the Mirage conference room table, and take a photo. Why? Who the heck knows. 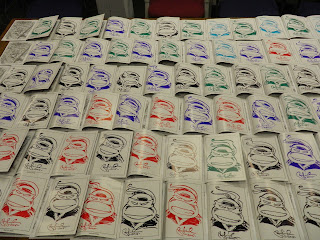 This photo only shows part of the group -- I couldn't get a good angle to show them all, and the photos I took to create a panoramic image (using the PanoramaMaker5 software) which would show them all didn't work with that program, for some reason unknown to me.

While taking the photographs, I decided to count the copies to make sure there were actually one hundred… and was startled to find that there were only eighty-eight.

D'oh! I thought I was done with this! I guess I have to get out another twelve copies and grab my Sharpie markers again. -- PL

[Note -- these signed and sketched-in copies are for a special Mirage Licensing promotion seen here:

Go towards the bottom of the page to find the details.]
Posted by PL at 8:08 AM 26 comments: