We had a treat yesterday -- the TMNT 25th Anniversary "Party Bus" stopped by Mirage on its way back to the garage from which it originated. This was the first time I had actually seen it up close, and it was pretty cool. The dressing of the bus to make it look like the "party wagon" from the original tv series and toyline was quite well done. Here's a photo I took of the bus parked near the office. 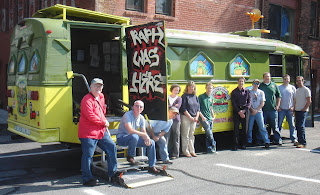 Everyone who was at Mirage that morning either working or visiting came outside to check out the bus. From left to right: me, Mike, Rick, Kendall, Katie, the guy who played Michelangelo at the tour stops, Gary, Dan, the driver of the bus, Dave, and Jim. -- PL
Posted by PL at 6:45 AM 15 comments:

Blast from the Past #231: Cover of second Palladium Books TMNT roleplaying game book

This is the black and white drawing Kevin Eastman did as the basis for a finished color piece that was used on the cover of the second TMNT role-playing game book published by Palladium Books back in the 1980's. I believe the title was "Teenage Mutant Ninja Turtles Adventures". 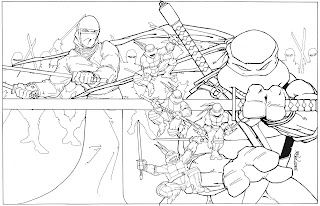 I think this is one of Kevin's best cover layout designs, and the color version was very cool. But I always found the Foot ninja in the skirt (in the foreground on the left side) kind of odd. -- PL
Posted by PL at 6:43 AM 16 comments:

Blast from the Past #227: Sorceress with flock of little Turtles

I have this nagging feeling that I've posted this before, but I did a few searches and couldn't find it. So what the heck... here it is again (maybe)... 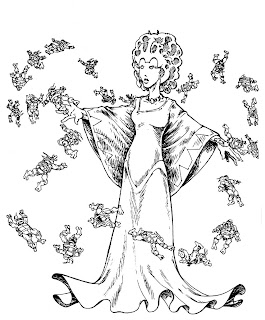 I can't remember exactly why I drew this, but I was probably in a whimsical mood at the time. There's no date on the drawing, but were I to guess I'd place it in the late 1980's. -- PL
Posted by PL at 8:47 AM 3 comments:

Email ThisBlogThis!Share to TwitterShare to FacebookShare to Pinterest
Labels: Blast from the Past, TMNT

Blast from the Past #226: Mutants for Playmates Toys

I have a feeling some of this art may have been posted before, but not in this form. This was a small "Rogue's Gallery" of mutant villains that we put together as an idea for Playmates early on. I penciled these guys and Kevin inked them.

I kind of like the looks of these characters, especially the alternate takes on Bebop and Rocksteady. -- PL
Posted by PL at 6:58 AM 7 comments:

Email ThisBlogThis!Share to TwitterShare to FacebookShare to Pinterest
Labels: Blast from the Past, mutant, Playmates, TMNT

I penciled these layouts for "Quest for Dreams Lost", a one shot benefit comic (a fundraiser for the Literacy Volunteers of Chicago), back in 1986 or 1987. "Quest" was published in 1987, with all proceeds going to aid the LVOC. A number of other independent comics creators also provided stories featuring their characters searching for famous artifacts associated with literature. In this case, the Turtles were looking for King Arthur's sword Excalibur. 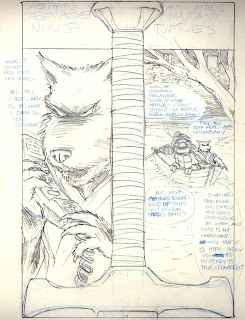 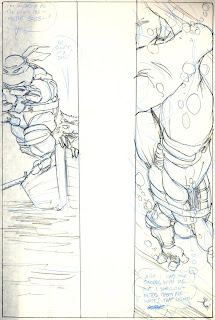 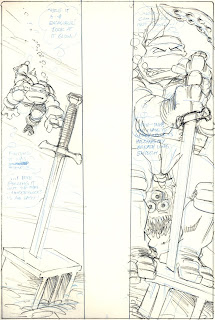 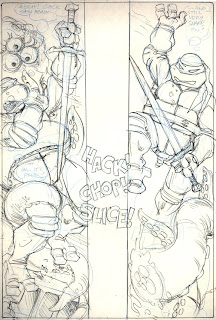 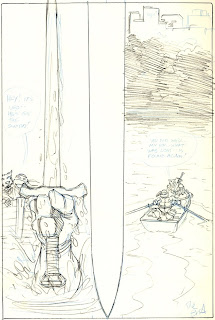 If memory serves (and I offer the caveat that I have not looked upon the finished work in many years), I believe Ryan Brown did the inking. -- PL
Posted by PL at 7:39 AM 10 comments:

Email ThisBlogThis!Share to TwitterShare to FacebookShare to Pinterest
Labels: Blast from the Past, comic, pencil, TMNT

Blast from the Past #223: Pencils for Archie TMNT Adventures Special, Fall 1992

Here's another of my Archie "TMNT Adventures" covers in pencil form, from 1992. I've always liked this one, partly for the unusual layout. I think Ryan Brown inked this cover. 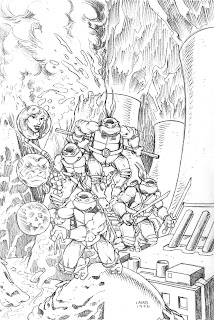 I'm trying to remember if this layout was my idea or Murph's. It's been so long I don't really know. Maybe Murph does. -- PL
Posted by PL at 7:37 AM 3 comments:

Email ThisBlogThis!Share to TwitterShare to FacebookShare to Pinterest
Labels: Archie, Blast from the Past, cover, pencil, TMNT

Blast from the Past #221: Archie TMNT Adventures #5 cover

Here's another Eastman/Laird collaboration from the Archie "TMNT Adventures" days. This is the cover for issue #5, which Kevin penciled... 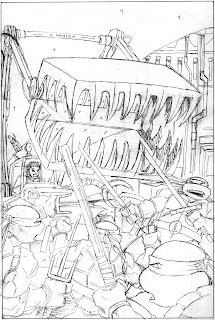 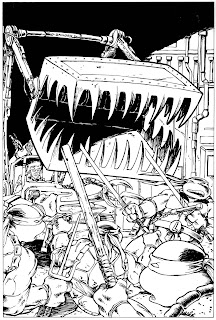 Looking at this again, I see something which has always irked me -- when a penciler doesn't take the time to fill in large black areas with pencil, instead just putting an "x" in the areas which need to be filled with solid black. It's probably an efficient way to save time, especially when you are inking your own work, but I've always thought it looks lame and unfinished. When I am inking somebody else's pencils, I like to see a completely penciled page. -- PL
Posted by PL at 8:38 PM 5 comments:

Email ThisBlogThis!Share to TwitterShare to FacebookShare to Pinterest
Labels: Archie, Blast from the Past, cover, Kevin, pencil, TMNT

I can't exactly remember the title of the publication for which this cover was done, but as I recall it was one of the things that Solson published during the eighties under license from Mirage. 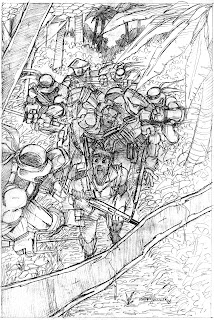