Blast from the Past #39 repost: Michelangelo's new costume

This is one more of the proposed redesigns for the unfilmed fourth live-action TMNT movie. Here we gave Mike a more “street” look because his new mutation gave him the ability to project a human appearance onto his turtle features, allowing him to interact freely with humans. 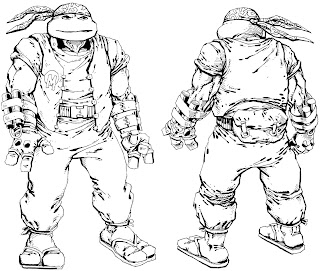 This reminds me a little of an even earlier idea Kevin and I toyed with for the TMNT comics. We had this (admittedly more than a bit goofy) plan to have Donatello make "human disguises" which the Turtles could wear that would allow them to move around undetected in public. These disguises would not have survived really close examination, though... for example, to accommodate the Turtles' three-fingered hands, they would wear special latex gloves which from a distance would look like human five-fingered hands, but actually had the index finger and middle finger fused into one, and the other two fingers also fused together in this way. I think I have a quick sketch of this somewhere, but I haven't seen it in a while. -- PL
Posted by PL at 5:07 PM

Email ThisBlogThis!Share to TwitterShare to FacebookShare to Pinterest
Labels: Blast from the Past, conceptual sketches, Michelangelo, TMNT