Blast from the Past #111: Donatello with computer

Here's one of many "pinup"-type drawings I did years ago, this one from 1985. It's interesting to look at these early pinups, when I was still drawing the Turtles as they appeared in the first few issues of the comic book. 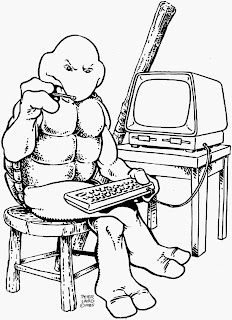 There are a few interesting details about this one which are worth pointing out. First, this is one of only a few drawings of a Turtle that I've ever done which show him without the signature mask, belt, wristbands, knee pads and elbow pads. (I think it was because of the idea behind this drawing -- Don's at home, working on his computer, "at ease" if you will. It's actually something I wish we had been more cognizant of while doing the comics, the movies and the tv shows -- that the Turtles, realistically, would not ALWAYS wear their gear. Sometimes it gets kind of ridiculous -- when you see them sleeping in it, for example!)

It's funny to look at the computer Don's using -- obviously state-of-the-art at the time, but looking pretty dated now, with its bulky CRT monitor and dual five inch floppy disk drives.

Also, this drawing somewhat obliquely references something that I had given some thought to but never really did anything about, preferring to just let it slide... and that is the fact that, given the size and shape of the Turtles' fingers, it would be very difficult for any of them to type on a standard computer keyboard! I remember that this is why I drew this one with Don holding that pencil -- I was thinking that he could use that to press the keys with so his big green fingers wouldn't mess things up.

I even, at one point, did a few little sketches for "typing caps" -- little plastic doodads which could be slipped over a Turtle's fingertips. These caps would have small, normal finger-sized projections which would allow for more easy typing.

Email ThisBlogThis!Share to TwitterShare to FacebookShare to Pinterest
Labels: Blast from the Past, Donatello, pinup, TMNT