Blast from the Past #37 repost: Leonardo's new costume 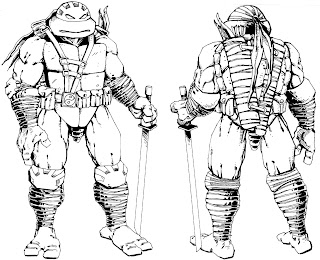 The “rising sun” bandana on Leo in this version actually comes from a much earlier costume redesign session, when we were toying around with changing the costumes for the Turtles in the comic books. I kind of dig the “utility belt” Leo has in this drawing. I believe Leo’s new mutation was the ability to morph his skin into a kind of nearly impenetrable chrome-like surface (shades of Ben Boxer from Jack Kirby’s “Kamandi” comics!). -- PL
Posted by PL at 7:38 PM

Email ThisBlogThis!Share to TwitterShare to FacebookShare to Pinterest
Labels: Blast from the Past, conceptual sketches, Leonardo, TMNT