I got the word today from Michael Dooney that he had finished the cover painting for the next issue of TMNT Volume 4 -- #31 -- and he'd left it on one of the computers at Mirage. So this afternoon, while I was at the office waiting for Eric Talbot to get there so he and Jim Lawson and I could go for a short (but sweet) motorcycle ride, I copied it onto my trusty memory stick and brought it home.

And here it is! 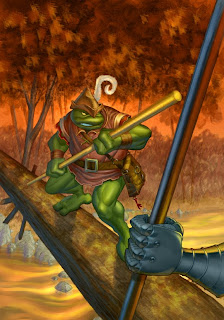 Now that Mike has worked his magic, I think the only thing left to do is put together the letters pages. So if you had been thinking of writing a letter of comment, now would be a good time to finish it up and send it in. -- PL
Posted by PL at 8:26 PM 17 comments:

Blast from the Past #199: Biker gorilla

This is another one of the sketches I did back in the late 1980's when Kevin and I were trying to come up with concepts to help Playmates flesh out the rapidly-expanding TMNT toy line. 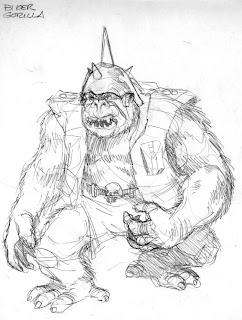 This one was meant to be in keeping with the "mutant animal" approach which Playmates found so successful. -- PL
Posted by PL at 8:40 AM 4 comments:

Blast from the Past #198: Robot Foot Soldier designs

These three drawings are not dated or well-annotated, so it's a little hard for me to remember exactly when they are from and for what reason they were created. But I probably did them in the first decade of TMNT. 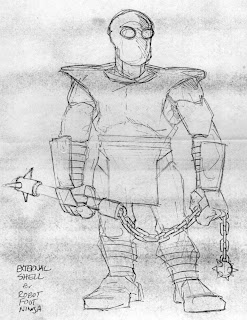 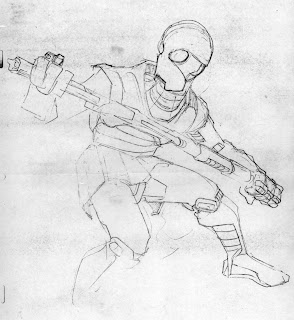 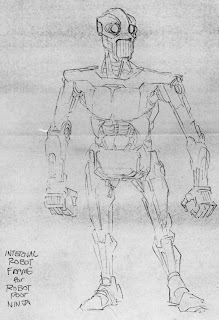 I wish I could remember if I did these with the intent of using the concepts and designs in the comics, or if they were something I did for Playmates Toys. I don't recall ever planning any humanoid robot Foot ninja for the comics, but they were a common sight in the first animated series. It's even possible that these sketches came before the designs were settled on for the way the Foot soldiers appeared in that show... but don't quote me. -- PL
Posted by PL at 8:03 AM 9 comments:

Blast from the Past #197: Michelangelo kneeling with 'chuks

Here's another of my pinup drawings, this one of Michelangelo in a ready pose, from 1987. -- PL

Email ThisBlogThis!Share to TwitterShare to FacebookShare to Pinterest
Labels: Blast from the Past, Michelangelo, pin-up, TMNT

Blast from the Past #195: Raphael with shoulder-mounted weapon

I'm not sure exactly WHAT this weapon on Raph's shoulder is supposed to fire -- maybe some kind of missiles -- or WHY I drew it back in 1987. But I do like the way it turned out. -- PL 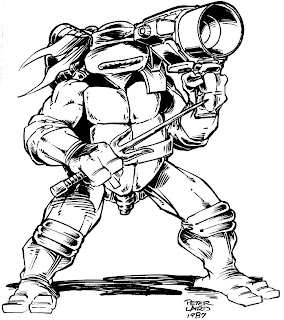 Email ThisBlogThis!Share to TwitterShare to FacebookShare to Pinterest
Labels: Blast from the Past, pin-up, Raphael, TMNT

Blast from the Past #192: Donatello in a relaxed pose

Here's another one of my old pinup drawings, this one from 1987, of my favorite Turtle in a relaxed pose... just "takin' five" between ninja battles, perhaps. -- PL

I did get to print out a couple of proof copies of TMNT #31 today (thankfully, the printer seems to be able to do duplexing again, after being on the fritz for a few days... actually, it's not the printer's fault, but the new Macs we got to replace some old ones -- some kind of classic new operating system software/printer driver conflict... but that's neither here nor there). I gave one copy to Jim to check out (and got an email from him tonight saying he liked it... thanks, Jim!).

I took my copy home and read it through once, and found a few mistakes, and will likely read it through a few more times. I am pleased that this issue seems to be coming together without too many hitches, because this marks the first time I have composited an issue of TMNT directly in Adobe InDesign. Prior to this, I would always do it in a version of Quark Xpress, and for the last few years after I'd done that I would convert the Quark file into an InDesign file (Dan likes them better, and he's the dude interfacing with our printer). There were always some glitches during this conversion process, and I would end up spending several more hours correcting them.

So I finally decided that even though I was really comfortable with the lettering tools in Quark, I had to learn how to do it in InDesign. I'm still not loving InDesign's tool set, but I think I can get used to it eventually. -- PL
Posted by PL at 11:40 PM 12 comments:

I just finished lettering TMNT #31, and hope to get down to Mirage today to make a proof print.

A few weeks ago, Murph gave me (and several other Mirage artists) a sheet of card stock pre-printed with "March of Dimes" info, and asked if I would do some art on it so that it could be auctioned off along with other similar pieces to benefit the "March of Dimes". I only managed to get to it today. 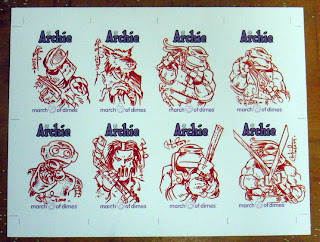 I was planning to pencil, then ink, but then I decided to throw caution to the winds and just draw directly in ink. That's always a crap shoot (at least for me), as it doesn't allow for the planning that penciling does. But I think they came out okay, although the Fugitoid looks a little too much like a monkey for my tastes. -- PL
Posted by PL at 8:16 PM 11 comments:

Email ThisBlogThis!Share to TwitterShare to FacebookShare to Pinterest
Labels: March of Dimes, TMNT 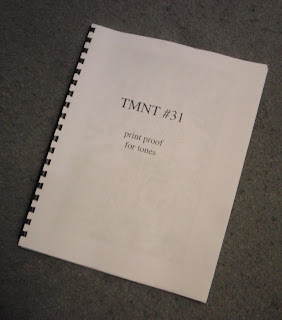 I have pretty much finished the tones for issue #31 of TMNT, and if all goes well in the lettering stage (which I hope to begin tonight or tomorrow), #31 might be sent to the printer within a few weeks. The photo above is of the cover page of a "proof print" I did so that I could see how the tones were going to look (sometimes things look different when they are printed than when you were looking at them on a computer monitor). I also wanted to get a look at one particular page on which I think I spent the most time doing tones of any page in all of Volume 4... and I'm not sure people will be able to tell. We'll see, I guess.

So this means, I think, that if anyone wants to write a letter of comment for possible inclusion in issue #31, they should probably do it in the next couple of weeks.

Blast from the Past #191: Michelangelo in attack mode pinup

Here's another of my pinup drawings, this one a leaping Michelangelo from 1987. -- PL 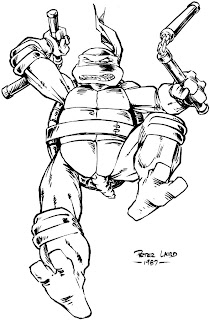 Email ThisBlogThis!Share to TwitterShare to FacebookShare to Pinterest
Labels: Blast from the Past, Michelangelo, pin-up, TMNT 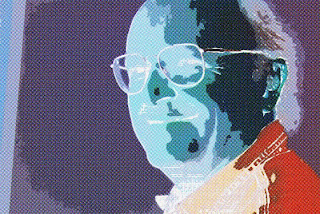 It's been a while since I've done one of these... so long, in fact, that I can't remember if this should be #4 or some other number.

This is Kevin Eastman's pencil art for the cover of issue #9 of the TMNT color series published by Mirage. I'm pretty sure I inked this, but I can't remember offhand who colored it. -- PL 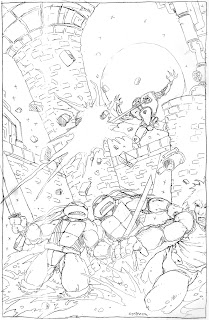 P.S. -- Looking at the printed cover on the ninjaturtles.com website, it kind of looks like my Photoshop coloring, but I'm not completely sure.
Posted by PL at 7:38 AM 4 comments:

Blast from the Past #189: Donatello in fighting stance pinup

This is another of my pinup drawings from 1985. 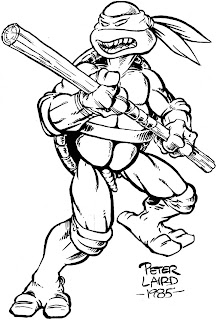 Blast from the Past#188: Pencils for cover of TMNT Volume 2 (color series) #3

Here's another one of those covers I penciled for the color TMNT series that Mirage published. This one features Baxter Stockman in his (then) new robot body, some hapless DARPA guys, and a giant Turtle head. -- PL 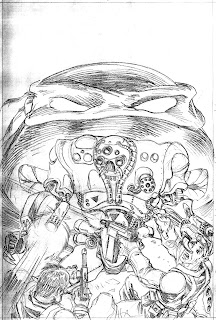 Email ThisBlogThis!Share to TwitterShare to FacebookShare to Pinterest
Labels: Blast from the Past, cover, pencil, TMNT, TMNT color series

Blast from the Past #186: Leonardo pinup

Here's one of my TMNT pinup drawings from the early days, in this case a Leonardo from 1985. 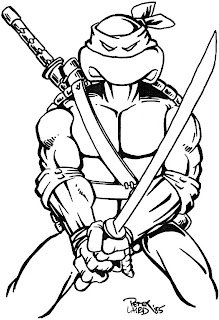 It's interesting to compare these to later drawings, to see how my style of drawing the guys changed over the years. And not just the style... you can see by the fact that Leo has one broad diagonal strap across his chest -- instead of the two narrower ones we later settled on -- that some of the costume details were still in flux. -- PL
Posted by PL at 8:30 AM 5 comments:

Email ThisBlogThis!Share to TwitterShare to FacebookShare to Pinterest
Labels: Blast from the Past, Leonardo, pin-up, TMNT

Blast from the Past #185: "Team Mirage" roadracing Turtle

This is another one of the amazingly cool drawings Jim Lawson did back when "Team Mirage" was in full swing, sponsoring several motorcycle racers. 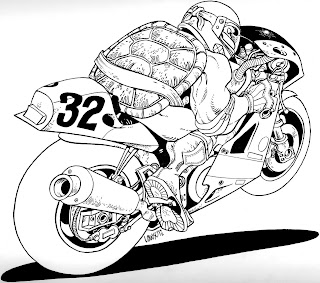 Our roadracing guy in the AMA superbike class, Dale Quarterley, had the number 32 on his bike. -- PL
Posted by PL at 7:54 AM 5 comments: