It's been a long time coming, but my plan for this thirty-second issue of TMNT Volume 4 is to try -- and I emphasize the word TRY -- to have it ready to purchase, in printed form, in time for my appearance at Steve Lavigne's "Shellback Artworks" store in Wells, Maine, on May 4. My intention is to offer it there exclusively, at least that day and probably for a little while afterwards. I thought it would be appropriate to do this, given that Steve Lavigne inked this issue, and did a really good job.

I think it is possible -- I have a few more tweaks to do to the work I've already done on the lettering and sound effects, plus I have to figure out what to put in the extra inside pages and inside covers and back cover, and my pal Mike Dooney has not fully completed the wonderful painted cover he started a long time ago -- but I don't want to offer any guarantee that the book will be ready for May 4. But it almost certainly will be ready and on sale this spring, probably in both the limited edition, $10 per printed copy fashion I tried out with issue #30, as well as a freely-readable digital issue available online.

In the meantime, if anyone wants to send a letter of comment for consideration for possible inclusion in this issue, I am open to that. I would prefer to not get questions about the upcoming TMNT movie or the Nickelodeon animated series or the ongoing IDW TMNT comics, as I have no involvement in any of those things, but if you must ask questions about those topics, I will deal with it. The sooner letters get to me, the better, with a real deadline being probably the first of April. Of course, I can't guarantee I will print all of them.

If you want to send a letter, it would probably be easiest to just post it here as a comment. And to make sure I understand that your comment is actually intended to be in the running for inclusion as a letter in the printed comic, it would be a good idea to include "Okay to print" somewhere in the comment.

In the meantime, I thought some of you might be interested in a small peek at my process of putting one of these books together, specifically in the area of writing the dialogue for the story.

Sometimes -- back when we were doing this on a regular basis -- I would do this with the penciled artwork, but in this case, I had Steve's inked versions to play with. I scanned them all, and did a quick assembly of the pages in Quark XPress so that I could print out a copy of the book with all of the artwork in it, with pages back to back, but obviously with no dialogue or sound effects yet. There were also no tones at this point. Here's the cover of that "dummy" copy, on which I have scrawled some words to let me know what it is. 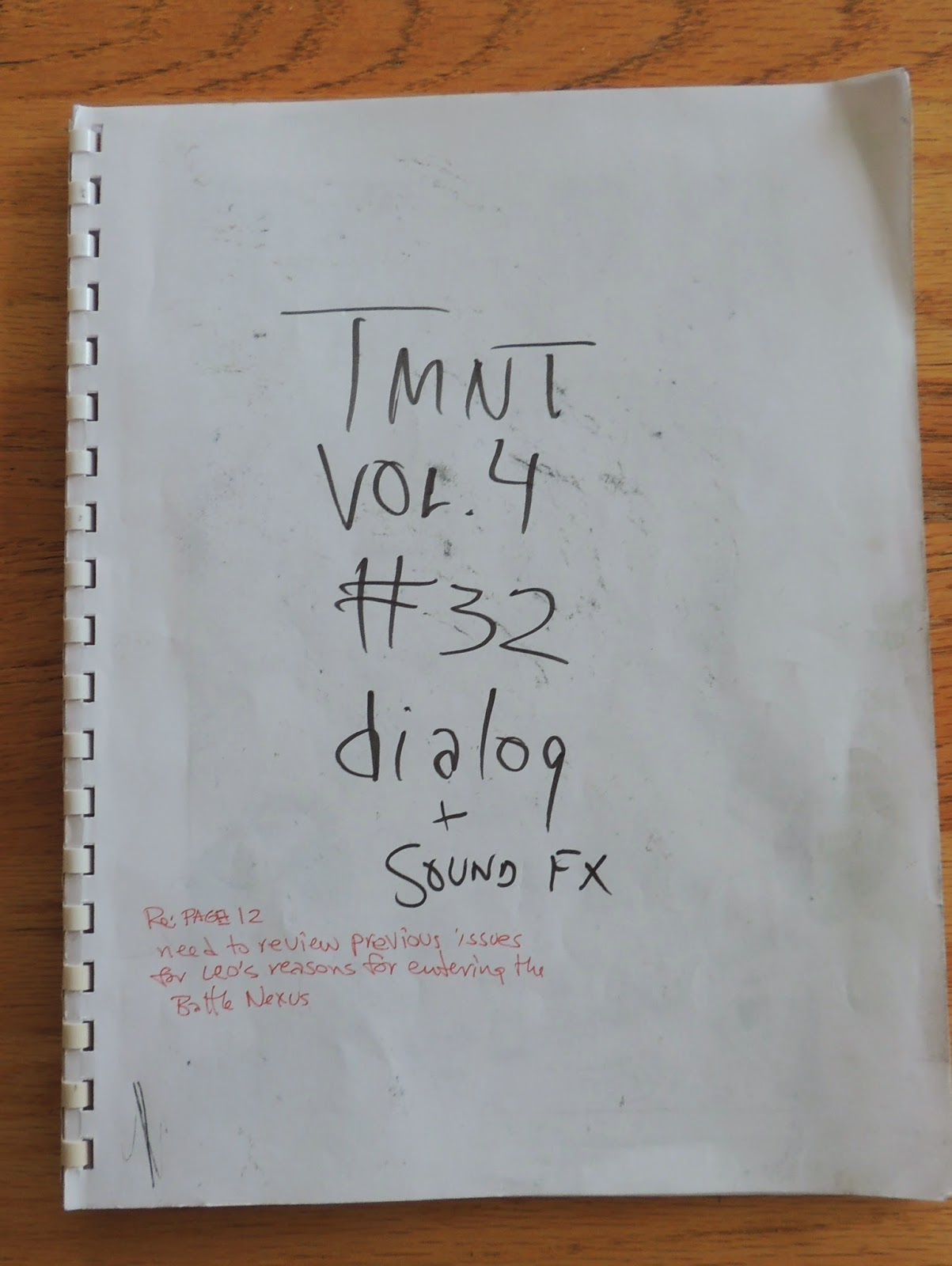 Once I have this comb-bound dummy copy, I start referring to the plot synopsis I had originally given to Jim Lawson to remind myself of key elements which need to be in the dialogue (this text is printed on pages which I bound into this copy, in the back). Once I have gotten myself warmed up and my memory is refreshed, I get out a fine point color marker (in this one I began with a green marker, then switched halfway through to a brighter orange one) and start roughing in the dialogue. Occasionally, I will indicate where the dialogue should be located in the panels, but often is just enough to have it around the edges of the panels, and I rely on memory and context to make sure I know where to put it when I do the finished lettering in Quark.

Sometimes -- not often -- I will realize that, for better flow of the dialogue I am coming up with, I should consider moving panels around. In the case of the two pages seen below -- pages 2 and 3 of issue #32 -- I actually did some of that on each page. The first image is of the roughly-dialogued pages with the untoned art as originally drawn and inked… 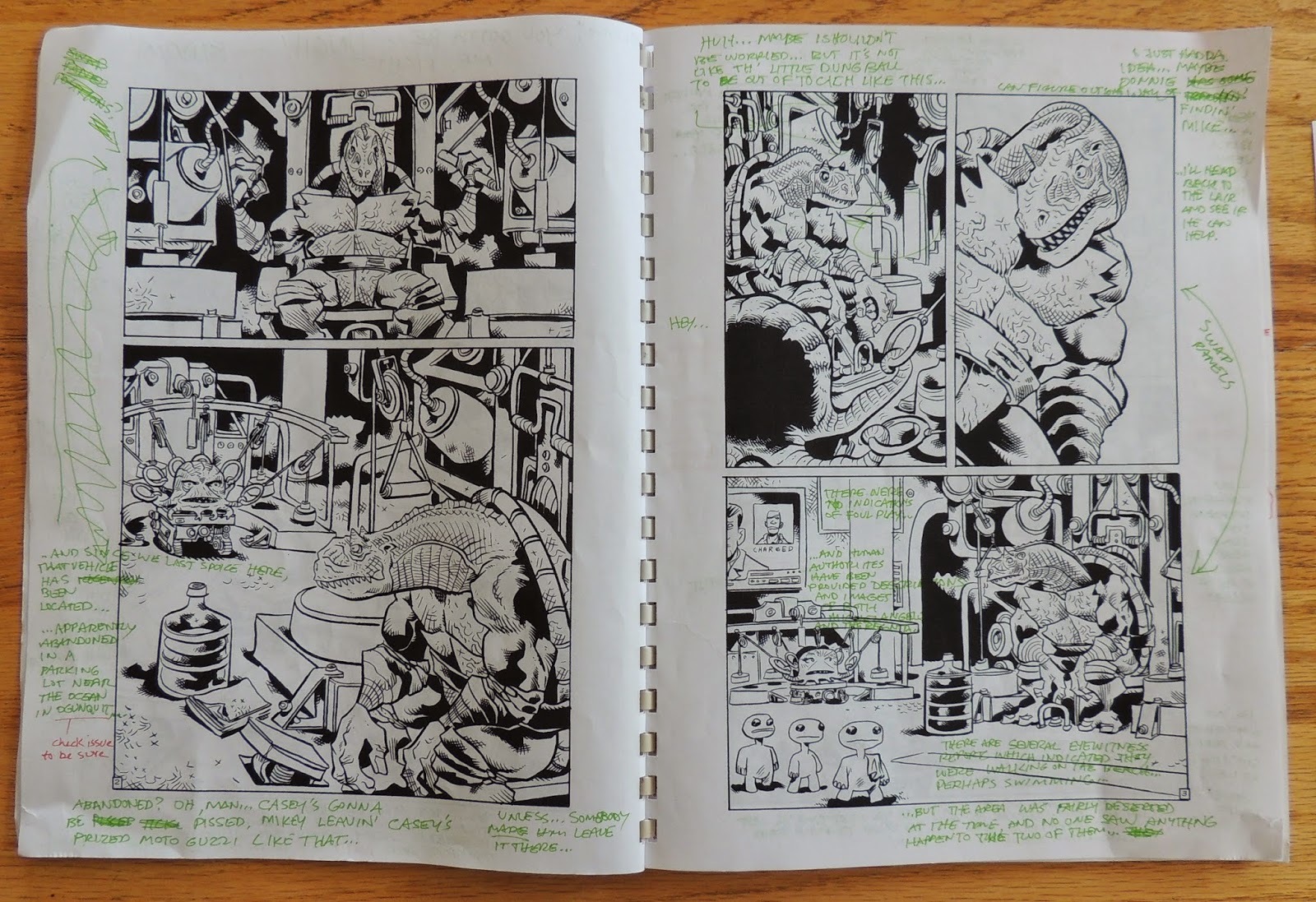 … and the following image shows how things were changed in the later stages, with tones, lettering, and some shifting of panels. -- PL 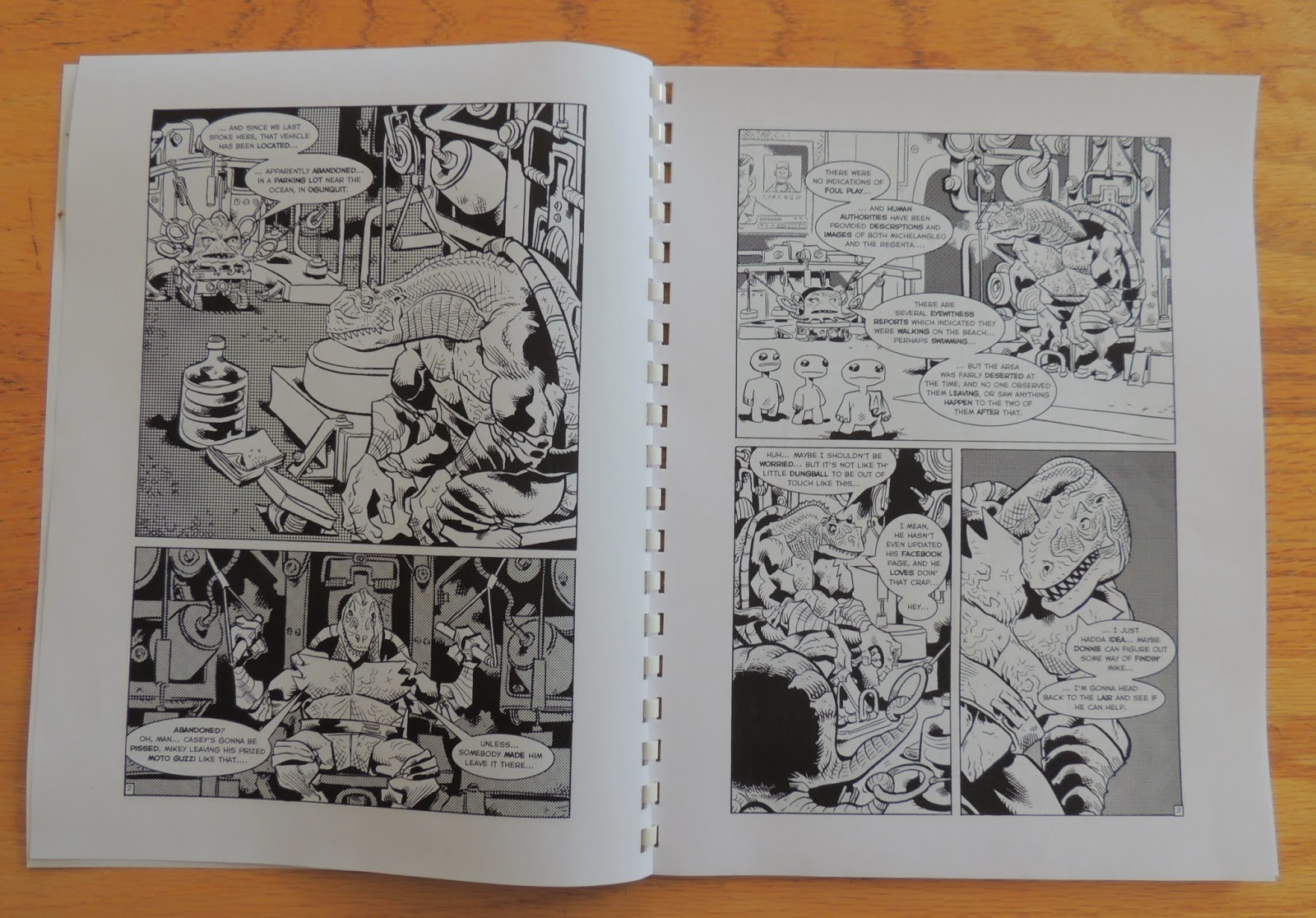 Email ThisBlogThis!Share to TwitterShare to FacebookShare to Pinterest
Labels: TMNT 32 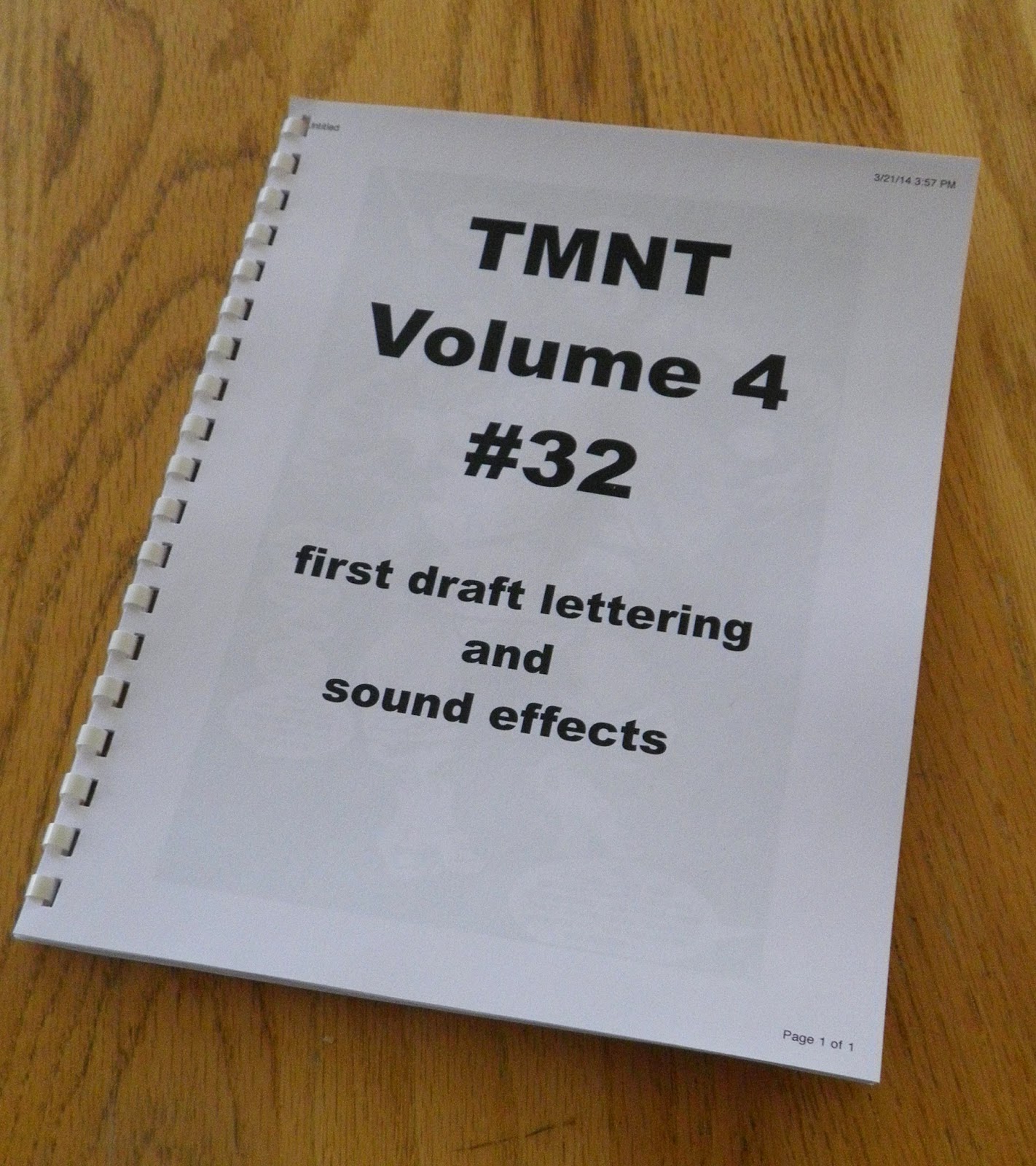