Blast from the Past #34 repost: "Who is this? Fugitoid" iron-on

This is another piece of art from 1983 (pre-TMNT) done to be used to make iron-on t-shirt transfers -- this one was penciled by Kevin and inked and colored by me. 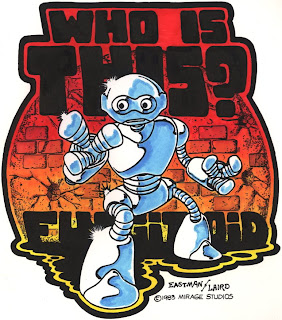 We did a few of these at the local Portsmouth, NH copy center, the only place in the area with a color laser copier (actually, now that I think of it, those devices were nearly as rare as hen's teeth back in 1983). These iron-ons were created to promote the "Fugitoid" comic story we had done, which at that time we actually planned to publish in the form of "poster comics" -- four 8.5 by 11 inch pages which then unfolded into a huge 17 by 22 inch fifth "poster" page. (This is why, if you have the original "Fugitoid" comic book, you may have noticed that nearly every fifth page is a full page spread.)

The original art was done in reverse, so the iron-on appeared in the right orientation when applied to a shirt. For this "Blast", I flipped the art so it would read easier. Now that I think of it, this may be the first color image of the Fugitoid that we ever did. -- PL
Posted by PL at 4:22 PM

Email ThisBlogThis!Share to TwitterShare to FacebookShare to Pinterest
Labels: Blast from the Past, Fugitoid, iron-on, Portsmouth