Blast from the Past #33 repost: Donatello with radio-controlled motorcycle 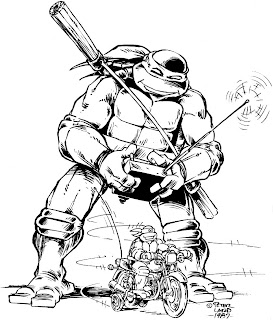 This drawing, penciled and inked by me in 1987, was inspired by a period when we were living in Connecticut during which Kevin Eastman, Steve Lavigne, and I got into radio-controlled (RC) racing cars. Those babies were awesome! The first time we saw them was behind an ice cream parlor in Amenia, NY -- there was a hobby store on the second floor, and they had a little dirt racetrack for the RC cars out in back of the building. We couldn’t believe our eyes when we saw these cars flying around the track, banging into each other, jumping over berms, and throwing (relatively) huge roostertails of dirt behind them. We bought several kits (another fun aspect -- you had to build these things, and you could buy all kinds of trick speed parts for them). I still have the first one I bought, and it still goes like a rocket! One of my favorite things to do with this car was to take it out onto the lake near our house in Connecticut, in the winter when it was frozen over and there was a light, one or two inch dusting of snow on the ice. The car would make cool tracks in the snow as it skidded and slid around, throwing up sprays of snow.

Eventually, I did find an RC motorcycle, a lovely Tamiya model of a Honda RC-30 superbike racer... but it was never quite as much fun as the car (due to the inevitable balance problems of a two-wheeled radio-controlled vehicle). Of more recent vintage is the seven-time Supercross champion Jeremy McGrath-branded RC motocross bike from Tyco Toys, which is not only cheaper and more durable than the Tamiya kit, but comes fully assembled, has working front and rear suspension, does great wheelies, and can actually be driven on dirt... plus it has an uncanny ability to (most times) right itself when it had fallen over.

A curious thing about this drawing that I just noticed is the strap arrangement I gave Don for carrying his bo staff. I don't think I've ever used that configuration in the comics or elsewhere -- just in this pinup. -- PL
Posted by PL at 8:29 AM

Email ThisBlogThis!Share to TwitterShare to FacebookShare to Pinterest
Labels: Blast from the Past, Donatello, pin-up, radio-controlled vehicle, TMNT