Blast from the Past #679: Sketchbook page 23, ideas for Foot ninja


On page 23 of the sketchbook, I was playing around with another look at the Foot ninja -- this drawing incorporates elements of the "scary face" masks shown in previous sketches, as well as some new weapons. The notes I made on this page read: 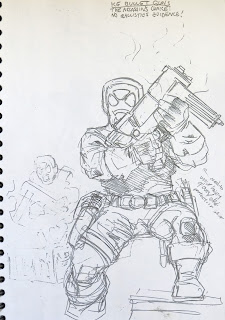 I think I was inspired by some crime show I saw in years past which posited the possibility of making a bullet out of frozen water -- ice -- so that when someone is shot by it, the bullet eventually melts, thus preventing any ballistics evidence from being collected. I'm not sure if it would work, technically -- could a bullet made of ice survive the stresses of being fired out of a gun? -- but it's an intriguing idea, nonetheless, and I thought it might be appropriately stealthy for ninja assassins like the Foot. -- PL