Blast from the Past #662: SKetchbook page 5, more ideas for Foot soldiers

Following in the vein of the previous page of this sketchbook, page five has some more conceptual sketches for possible new looks for the ninjas of the Foot clan. 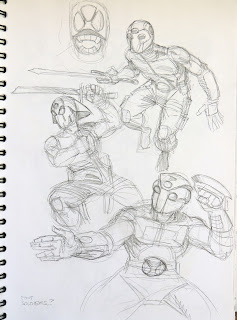 Apparently, I was thinking of leaning more towards a less traditional ninja type of garb, with some tech stuff and integrated body armor panels.

And judging from the doodle at the top of the page, I was considering giving the basic Foot mask a scarier appearance... loosely inspired, I think, by the look of Jack Kirby's "parademons" in his "Fourth World" comics ("New Gods", "Forever People", "Mister Miracle") for DC back in the 1970's. -- PL