Blast from the Past #658: Sketchbook page 1, drawing of Donatello with new costume ideas

I had completely forgotten about this.

Looking around in my incredibly messy room today for a few blank label sheets that I could use to create some return address labels for my wife's new self-publishing venture, Stone Door Press, I noticed an old, well-worn sketchbook tucked away under a pile of stuff.

I pulled it out and was surprised to see that it was from about 1994 and had forty-eight pages (if I am counting correctly) of drawings related to a couple of different proposed TMNT projects Kevin Eastman and I were working on at the time -- specifically a new TMNT comic book series and the fourth live-action TMNT movie.

Neither project came to fruition, but a few of the concepts lived on (sort of) in various iterations of TMNT in the years that followed.

(I think it was around this time that Kevin and I had agreed to reconnect, "get back to basics", and work closely together on a new TMNT comic book… and we went so far as to get come carpenters in to Mirage Studios to move a wall between our two adjacent offices so as to make our offices the same size, and to also install a sliding glass window in the wall. The idea behind this was that we would set up our drawing tables so that we could slide open the window and pass pages back and forth as we worked on penciling, inking and toning them, in a manner similar to the early days of working together on TMNT Volume 1.

So here is page one. It's a drawing in black pencil of Donatello, with a notation by me at the top which reads as follows:

"4/15/94  Don: Maybe he has failing eyesight and has to build himself some kind of cyber-gear to enhance his vision" 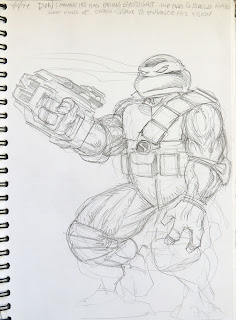 I seem to recall that this was an idea which either I alone or in concert with Kevin had come up with for some other project.

It appears that with this drawing I was playing around with some changes to Don's costume and gear, and I'd given him some kind of device -- a weapon, probably -- which sort of reminds me of the "Gravitic Equalizer" from the Donatello "One Issue Micro Series" Mirage published some years earlier. -- PL
Posted by PL at 8:25 AM