Blast from the Past #659: Sketchbook page 2, ideas for new TMNT comic


This second page in the sketchbook I found yesterday begins with a mistake -- I wrote the wrong date! Instead of April 18, 1994, I indicated that this was actually done on April 18, 1984 -- which would have been a neat trick, given that at that time, the first issue of the Teenage Mutant Ninja Turtles comic book hadn't even come out yet… and I'm already writing notes about their second stage mutations? Obviously, it was a "brain fart". 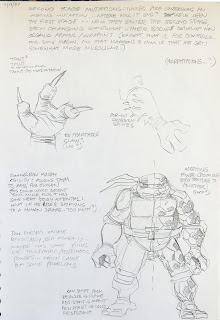 Anyway, once past that absent-minded error, here are the notes I wrote on that page:

"Second stage mutations: Turtles are undergoing an ongoing mutation… where will it end? We've seen the first stage -- now they enter the second stage, each changing somewhat… their bodies develop new organic armor/weapons (except, that is, for Donatello… for some reason, all that happens to him is that he gets more muscular.)

TMNT ²
TMNT
to the second power
TMNT: The Next Mutation

Chameleon morph ability: Allows them to pass for human (this would work great for Mike, plus it has some neat story potential: What if he likes shifting to a human shape.. too much?)

Morphing power (from one body texture to another) (Raph?)

Don doesn't mutate physically, but mentally… maybe he has some kinds of telepathic/telekinetic powers.. which cause him some problems

It's interesting to see how -- in classic sketchbook tradition -- I was using this medium to try to work out some as yet-not fully formed ideas. For example, near the top I refer to Donatello getting more muscular… and then further down the page I write that "Don doesn't mutate physically, but mentally".

I also find it interesting that in the sketch of the Turtle in the lower right-hand corner, I added a "T" (for "Turtle"...?) belt buckle kind of thing to his belt. Was I really thinking that was a good idea? -- PL