Blast from the Past #661: Sketchbook page 4, ideas for Foot soldiers

Here's the fourth page of the sketchbook, which features some loosely-penciled sketches of ideas for the soldiers of the Foot ninja clan. 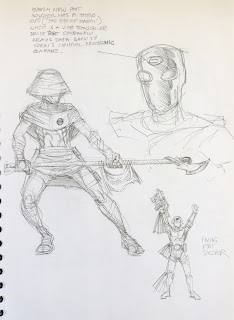 "Every new Foot soldier has a third eye ("the Eye of Karai") which is a video transceiver device that constantly relays data back to Karai's central processing computer."

Apparently, I was thinking that a tech upgrade to the Foot would be appropriate… something that, in a different way, eventually came to pass in the 2003 4Kids TMNT animated series.

Further down the page, I wrote:

… next to a small doodle of a Foot ninja with some kind of pop-out winglets at arm, waist, and calf. I don't recall going any further with this idea, but I kind of like it. From the way it is drawn, I suspect I intended them to be gliders rather than powered flyers. -- PL
Posted by PL at 6:36 AM