Blast from the Past #669: Sketchbook page 12, Foot stealth corps

This unfinished drawing on page twelve of the sketchbook is labeled at the top "Foot Stealth Corps"... which, upon reflection, seems a bit redundant -- I mean, as ninja, aren't the Foot supposed to be stealthy? 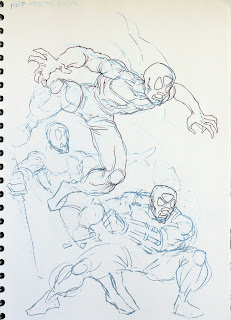 In any event, this appears to be an attempt on my part to think up a new look for some of the Foot clan's soldiers. I only partially inked this one, the remainder being in photo-blue pencil... which I had to mess with in Photoshop to get it to show up a little better, hence the rough look of some of those penciled lines. -- PL
Posted by PL at 7:06 AM