Blast from the Past #664: Sketchbook page 7, Raphael in "Tuff Skin" morphmode

Here on page 7 of the sketchbook, I drew Raphael using the morphing power from his new mutation to change the texture and density of his skin. It looks like I used some kind of marker to ink this one. 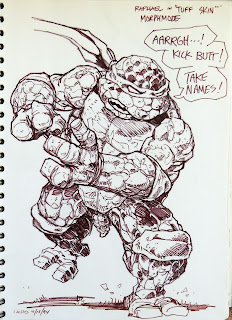 Sharp-eyed readers will probably recognize the similarity here with the way the skin of the Thing from "The Fantastic Four" looks. He was always one of my favorite comic characters, especially the way Jack Kirby drew him (and, in my opinion, no one since Kirby has really drawn him as well, or as convincingly).

However, as I recall, this rendering was just a test to see what might work with this new idea, and if we'd gone forward with it, we'd have figured out a style which did not so closely ape that of the Thing look.