Blast from the Past #671: Sketchbook page 14, ideas for further mutations 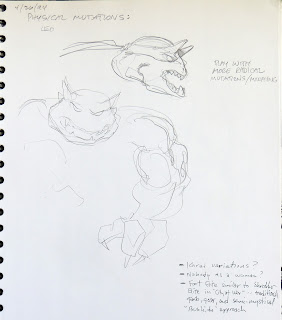 Not much on this page -- just a few quick doodles, trying to work out ideas for further mutations for the Turtles (apparently in this case specifically going in a sort of monstrous direction with Leonardo), along with some other potential story notes. Here's what I wrote on this fourteenth page of the sketchbook:


It's interesting to me that roughly a decade before I had April O'Neil don the mantle of Nobody in the TMNT Volume 4 comic books, I was thinking about introducing a female Nobody. -- PL
Posted by PL at 7:41 AM