This is an artifact from the days when I sponsored a motorcycle racing team that we called "Team Mirage". All the racers rode TMNT-themed bikes, and Dale Quarterley was our road racer, competing in the AMA superbike class. 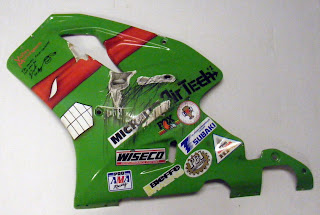 Dale gave me this side panel from the fairing of his Team Mirage Kawasaki race bike. It bears the scars from a crash he had in 1992 at the Mid-Ohio race course. I attended that race, having ridden out to Ohio with some motorcycling friends, including Gary Richardson (who also ran Team Mirage for me, and did a great job of it), Ed Smith and Jim Lawson. I can't remember if it was oil or water on the track that made Dale hit the deck, but he did, and the bike slid across the pavement for quite a ways. You can see the gouges where the pavement abraded the pant and plastic of the fairing panel.

Dale actually won the race on a Team Mirage bike the following year... a pretty amazing thing for a privateer competing against factory teams. Unfortunately, I was not in attendance, but Gary was, and got to take part in the victory celebrations. -- PL
Posted by PL at 8:27 AM