Blast from the Past #83 repost: Pete in old studio

Steve Murphy found this old photo of me while going through some files. I think it was taken by our photographer friend, the late Fred Moore, but I'm not completely sure. It was shot in the old factory building in Northampton where Mirage rented, for a few years, a big art studio space -- one large open room -- in which all of the artists worked, before we centralized both art and business spaces in one location in downtown Northampton. (Kevin Eastman would later buy part of this same building to house his Tundra publishing venture.) 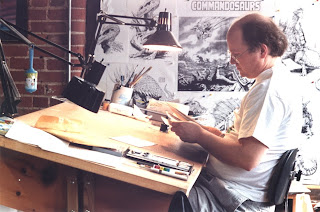 I'm not sure when exactly this was taken, but I suspect it was sometime in the late 1980's or early 1990's. This was my workspace in the northwest corner of the studio -- note the cork board with all of the COMMANDOSAURS art in the background, and the classic homemade drawing table constructed from a hollow-core door mounted on a frame made with two-by-fours (and maybe a few two-by-sixes). If I'm remembering the layout of the room correctly, looking straight ahead from my spot I would see Jim Lawson, then further down Kevin Eastman and Eric Talbot. To my left, Ryan Brown and Steve Lavigne had their work spaces. I know Mike Dooney had a space here, but I can't remember where it was. (I think it was next to Jim's... I'll have to ask them.) I think Steve Murphy may have also had a desk here, but I could be mistaken.

I just noticed one of my daughter's baby toys -- a rattle -- hanging from one of my desk lamps. I occasionally brought her in with me, and she'd have fun rolling around in her little rolling seat thing. (I have a distinct memory of one time watching Mike Dooney welcome her by yelling "EmmyEmmyEmmy!" as she was rolling around.)

UPDATE 03-03-09 3:45PM: Just had coffee with Dan, Mike and Jim and asked them about the layout of the old studio. Turns out I got almost everything right -- Murph had a desk between Jim's and Kevin's, and Mike's space was over near Ryan's, close to the basketball hoop. Dan didn't have an official space, but he says because Ryan wasn't there a lot, he used Ryan's table often. -- PL
Posted by PL at 8:24 AM