Here are a few more pages from that sketchbook. A few years ago, I did some art specifically with the aim of having it used on some licensed products. It may seem odd, but most of the art that has been used on the huge number of licensed TMNT products has been done by other artists, and I wanted to get a few things with some of my art on them.

So I started to put together a bunch of drawings which we were calling the "Peter Laird Signature Series", and added a small section in our official "Style Guide" with this art, in case any licensees wanted to use it. You'll note that while I drew these Turtles in my own style, I omitted the tails to keep them consistent with the other licensing art.

A few licensees used the art, which was cool, but I wish more had, especially on products like t-shirts and stuff that I could actually use. In any event, it was fun to do the artwork.

I started on a second series of drawings which I would have finished if there had been more interest in this stuff. Given that I had already produced a number of drawings of the different Turtles with their signature weapons, I thought it might be cool to do some with the Turtles wielding different weapons. The following are some that I finished inking, and some that are still in the (blue) pencil stage. Maybe I'll get around to inking them one of these days.

Here's Don with a Triceraton blaster... 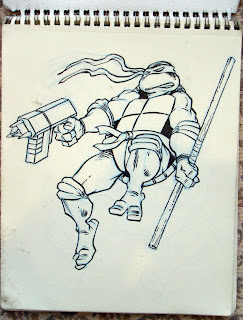 ... and Don with a Federation rifle. 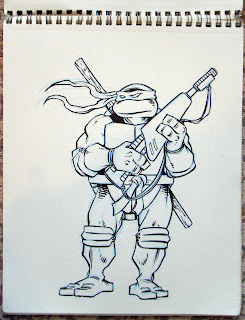 In this one, Raph is using a bladed staff (this weapon has a specific name, which of course I can't remember right now). 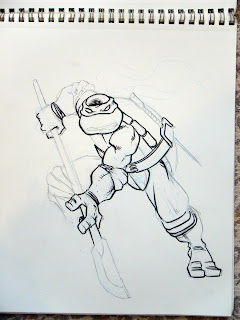 And here's Raph with an Utrom weapon. -- PL 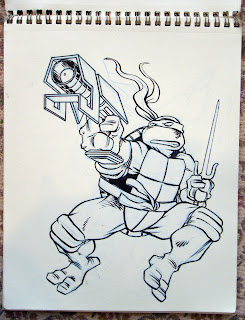 Email ThisBlogThis!Share to TwitterShare to FacebookShare to Pinterest
Labels: Blast from the Past, sketchbook, TMNT