Blast from the Past #90 repost: roughs for Leonardo and Usagi story "The Crossing"

Going through some old files a few years ago, I found this interesting artifact -- eight sheets of what looked like scratch paper clipped together, with my loosely-scrawled rough layouts and dialogue for my Usagi Yojimbo and Leonardo crossover short. It's been a while since I last read the finished piece, but I think it pretty closely followed these roughs. 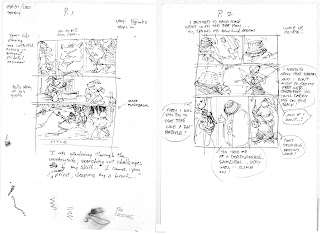 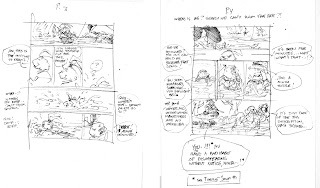 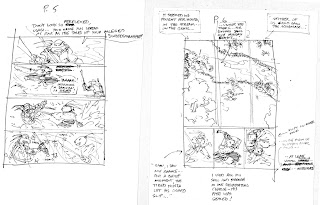 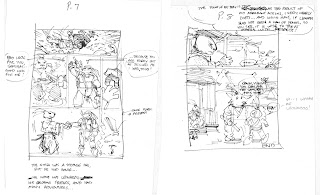 According to the folks at the very cool Usagi Yojimbo fan site (http://www.usagiyojimbo.com/), the issue of UY with this story is still available from Fantagraphics.

One thing I'd like to mention relates to a comment I read somewhere -- an UY fan was miffed that, in this story, I had Usagi behaving in an arrogant, obnoxiously aggressive manner... something the real Usagi would not do. That is true -- but what Usagi is doing in this little tale is using himself as the basis for an object lesson, a kind of parable to help the youngster understand concepts of honor and respect. To help get the message across, Usagi shades the truth and makes himself look less honorable than he really is. Looked at this way, it's very doubtful the Leonardo/Usagi meeting ever happened quite like this. (But it's still a fun story!)

Well, that's it -- I've finished reposting all of the old "Blast from the Past" posts I had originally put up on the "Planet Racers" website. It was fun doing it, as it allowed me to see your thoughts on those items. Going forward, "BftP" will now feature only new old stuff (and maybe a few new new things as well)! -- PL
Posted by PL at 8:00 AM

Email ThisBlogThis!Share to TwitterShare to FacebookShare to Pinterest
Labels: "The Crossing", Blast from the Past, crossover, Leonardo, TMNT, Usagi Yojimbo