Blast from the Past repost #89: front cover of special PBBZ Limited Edition reprint of TMNT Volume 1, #1

This is the front cover to a special limited edition (3000 copies) of the first issue of TMNT which was available for the first time at the Portsmouth, NH comic con on May 22 of 2004. What was new about this reprint was that I had retoned and relettered it, as part of a long-term effort to "remaster" all of the old issues of TMNT. There was also an essay by Ralph DiBernardo, who -- 21 years ago -- produced the Portsmouth Minicon at which Kevin and I premiered the first issue of the TMNT. 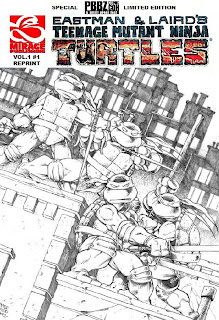 And for this twenty-fifth anniversary year, on "Free Comic Book Day", Dan Berger, Michael Dooney, Steve Lavigne, Jim Lawson, Steve Murphy, Eric Talbot and I will be doing a signing at Jetpack Comics (Ralph's store) in Rochester, NH from 10:00 AM - 4:00 PM on Saturday, May 2. A nice kind of almost perfect symmetry -- Kevin and I attended Ralph's Portsmouth Minicon to premiere the first issue of TMNT on May 5, 1984. -- PL
Posted by PL at 7:51 AM

Email ThisBlogThis!Share to TwitterShare to FacebookShare to Pinterest
Labels: Blast from the Past, comic, cover, Ralph DiBernardo, TMNT