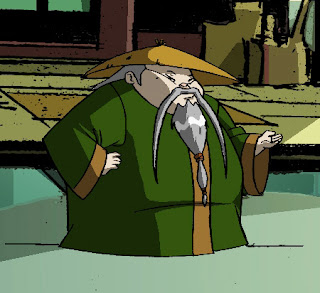 "*SPLINTER (VO CONT’D)
You see, I had procured Master Yoshi’s ashes … through great difficulty.  And, I was determined to honor his wish that he be buried in the home of his family, the Ancient One, in Japan."

The wording here in the second line is a little awkward. Here is an alternative:


"And, I was determined to honor his wish that he be buried in the land of his birth, and near the home of his sensei, the Ancient One... in Japan."


I raised the question last time around about this idea that Yoshi was the Ancient One's "son". This seemed off to me, so I went back and looked at the flashback episode titled "A Tale of Master Yoshi" (#100)... and found this:

"*Establish the old style Japanese house with a gated entrance.
*LEONARDO (V.O. NARRATION)
And so, the Ancient One took the boys to his house…


*INT. ANCIENT ONE’S HOUSE – CONT’D
*The two boys are hungrily <SLURPING> down big bowls of ramen as the Ancient One looks on sitting in full lotus and smiling.
*LEONARDO (V.O. NARRATION)
And, raised them both as if they were his own sons."

"WIDE ON ROAD as Splinter/Tots trail the EERIE RED GLOW emanating from ONI and the Ancient One.
*MICHELANGELO (VO)
Hang on!  Hold the phone!
DISSOLVE TO:
*INT.  APRIL’S APARTMENT – PRESENT DAY
*ON MIKEY IN FRONT of SPLINTER – looking at his BROS, confused.
*MICHELANGELO
Doesn’t it freak you guys out that we don’t remember ANY of this???"

I like this, and have a suggestion for a sound effect -- when Mike breaks in with his voiceover, maybe there could be the classic "needle scratching record" sound (SKKRRRCCHHH!) -- you know, the one which sounds like somebody has yanked the needle off the record, interrupting the flow of the story -- just before he speaks.

That mug bit is pretty funny.

"KARAI
Shall I assume that is only tea and not rat poison?
APRIL
Poison won’t work if you have no heart."

Why "RAT poison"? I think just "poison" would be fine and not raise any questions about Splinter (April's rat pal) in this context.
Also, if you think about it, April's response is a little odd -- the clear implication (well, clear to me, anyway) is that she WOULD have put poison in Karai's tea, but unfortunately, Karai has no heart and it wouldn't work on her, so why bother? Which, I'm PRETTY sure, is NOT what we want April to be saying here.

"Karai grabs the TEA SERVICE and <SMASHES> it over Chaplin’s back. He sets her down.
KARAI
Fool! They are not keeping me captive. They’re helping protect me!


Suddenly serious, Chaplin takes Karai’s hands. Casey and April share a concerned look behind them.
CHAPLIN
But mistress, nothing can protect you now. Haven’t you heard what’s happened?"

Karai's move here seems like slapstick, and out of character. I'm sure she could get Chaplin to put her down without resorting to this "Three Stooges" move. Why doesn't she nerve pinch him or something a bit more subtle?
Also, Chaplin telling her that "nothing can protect you now" seems goofy -- I mean, isn't that why he's there, to protect her? If he really believes that nothing can protect her now, why's he even bothering?
And while I didn't mind that Chaplin referred to her as "Mistress Karai" when he enters April's apartment, having him call her just "Mistress" in this last line seems odd to me... and more like something a Foot soldier would do. I think he should just call her by her name here.

"RAPHAEL, LEONARDO, and DONATELLO burst into the room a beat later - dropping from CEILING VENTS, popping from a GRATE in the floor, etc. A full-on Ninja entrance!"

This is very goofy... and pointless.

"SPLINTER
Terrible nightmares have plagued me since we first met the Ninja Tribunal--
Mikey raises his hand enthusiastically, as if in school.
MICHLANGELO
Is it that one where you have a killer math test and you show up late and you’re not wearing any pants?"

I get the gag reference, but it would make a LOT more sense if it were said by someone who actually WEARS pants (which Mikey does not). Maybe a more Turtle-appropriate line could be used here... though I'm not sure what it would be.

"SPLINTER
Master Yoshi appears, like an angel… but he does nothing to protect himself as the Shredder attacks and… "

Splinter referring to Yoshi as an "angel" seems inappropriate, too Christian-like (which Splinter is not). Maybe "guardian spirit" would be better.

"LEONARDO
For someone who the Shredder impaled only a few days ago, you’re looking pretty healthy, Karai.
REVERSE – KARAI and CHAPLIN are on the roof in full armor (sans helmet) and she IS looking strong.
KARAI
Survival is what I do. We are in agreement, then? A temporary truce?"

Karai's "Survival is what I do" line is way too "cheesy movie tough guy" for me. Also, Leo's line seems superfluous -- I mean, we SEE that Karai is looking healthy and ready to fight. And it has little to do with Karai's response (which refers to a temporary truce). Perhaps Leo should instead say something about them working together against the Shredder.

"CUT TO:
INT. APRIL’S BUILDING. ANTIQUE STORE – MOMENTS LATER
The mood is tense. The Turtles pace one side of the room with Casey and April while Karai and Chaplin speak directly with Splinter and Ancient One."

If memory serves, this is the first time Karai has met the Ancient One. If so, it might be cool (though certainly not VITAL) to give her a moment in this scene where she expresses wonderment about being in the same room with him (assuming she would!) because she has heard tales of the legendary Ancient One. Or something.
And as I typed that, the thought occurred to me -- what would Karai be like now if, instead of the Utrom Shredder, she had had the Ancient One for her sensei?

"KARAI
Shredder has cast a spell of henkei – Metamorphosis."

A minor point -- but because Karai sees the Utrom Shredder as the "true" Shredder, I think she might say "This Shredder" instead of just "Shredder" here.

"SPLINTER
Ancient One and I have been meditating on Shredder’s presence here, and our investigation had uncovered a fluctuation in the city’s Ley Lines."

"CHAPLIN
After they’d gone, we found out that the Shredder’s Mystics had been planning this day for decades. It was their little “Keystone Project.”
REVERSE – CHAPLIN projects the grid from a fitting in his ARMOR. Everyone gathers around behind him to see what he’s doing.
CHAPLIN (CONT’D)
They bribed and blackmailed city officials to install mystical amplifiers around Manhattan, some as early as a century ago. I didn’t know what they were for-- Until now."

"A century ago"? That doesn't seem to fit into the timeline we have established with the Utrom Shredder coming to NYC... unless we want to say that the Foot Mystics came to NYC BEFORE the Utrom Shredder did... which I suppose is POSSIBLE, but is it LIKELY?

"SPLINTER
If the Shredder’s spell reaches the Keystones, it will anchor to the Ley Lines…and become irreversible. He will turn our world into a living nightmare."

While I am sure that Splinter knows a lot about things of a mystic nature, for some reason it seems that he (and Chaplin) are a bit too certain and sure of EXACTLY what is going to happen here. It strikes me that a lot of this is theory and conjecture on their parts, and should be referenced here as such.

"DONATELLO
Sure, pick one. The Statue of Liberty? Maybe the U.N. BUILDING? Oh, and where’s the closest “Dynamite R us?” "

Don's last bit here seems off, as I doubt (given his resourcefulness and what he might already have on hand) he would find much trouble coming up with enough explosive materials to destroy the Keystones (that is, IF he were willing to blow up the Statue of Liberty, etc.).