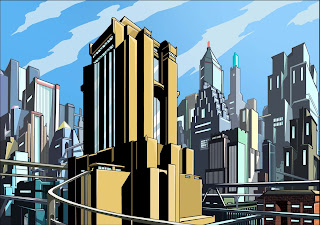 
Here are my comments on the 118 second draft.

This is slightly less lame than the line it replaces, but it's still bad. It doesn't sound at all like Splinter. Let's just have him do a "take" as he realizes that his clothes are gone. Or just skip this bit entirely.

"LEONARDO
Forget the TV. The whole lair is gone!
* DONATELLO
No, more like it decomposed."

Don's line is worse than the one it replaced:

Why the change? "Aged" is far more appropriate to the situation -- and how the lair looks -- than "decomposed". And because "decomposed" generally refers to things that were once alive going through the process of rotting after death, it's really not appropriate, ESPECIALLY coming from science nerd Don.

"RAPHAEL
What the shell just happened?
ON SPLINTER - heading for the exit.
* SPLINTER
An attack? We must inspect the damage."

Again, a line inferior to the one it replaces:

"SPLINTER
There is only one way to find out..."

The new line is weird and goofy -- Splinter thinks the lair has been attacked... so he goes OUTSIDE to "inspect the damage"?
I think there may be too much effort going on in this script to hold off the big reveal of the "surprise" -- that the Turtles and Splinter have been zapped into the future -- when in all likelihood it's not going to be too much of a surprise, given the clues that we are dropping. And there is a real danger of making the Turtles -- who have been through many weird adventures INCLUDING time travel -- look pretty DUMB if they don't at least have SOME inkling of what may have just happened. I mean, think about it -- they ALL recognize that they are in the same lair, but everything looks old. Hmmm...

"INT. ACCESS TO SURFACE - SECONDS LATER
Splinter and the Turtles make their way upwards, <HUFFING AND PUFFING>, their movements slow and lumbering.
DONATELLO
Is it... just me... or is it... really hard... to breathe... all of a sudden?
MICHELANGELO
And why does... my body... feel like it... weighs a ton?
* RAPHAEL
Prob'ly all that... junk food, Porkins. "

I still feel this is a very poor introduction to the gravity/atmosphere zones concept, ESPECIALLY as, when you consider what happens a few pages later, it's really superfluous... on top of not making much sense. See my last set of comments for more detail.

"ON TURTLES AND SPLINTER - on their hands and knees, weighted down by gravity and breathlessness, barely able to move, while Splinter seems to be unaffected by it all."

I might -- MIGHT -- buy the idea that Splinter has better breath control than the Turtles and can thus resist longer the effects of the different atmosphere. But the idea that he can somehow not be affected by the gravity that is weighing down the Turtles is just dopey.

"Blaster buster"? If this is an attempt at "future slang", it's lame. It's also unnecessary.

"* BIGGLES
Crumpets. Look high and low! They can t be far!"

"* RAPHAEL
All right, you got our attention. Talk --
* DONATELLO
(sotto)
Or we ll pass out all over his fine Corinthian leather?"

Why is Don doing a bad Mikey joke, and why is he phrasing it as a question? I'd lose this and go back to the original.

"Suddenly Mikey's descent slows as if he's light as a feather... which he is because there's hardly any gravity here. He takes a <DEEP BREATH>, overjoyed... but when he tries to speak &
* BUBBLES come out of his ears. "

Has the writer actually SEEN any of the TMNT episodes? Where, exactly are these ears the bubbles will be coming out of?

"RAPHAEL
Dat s it! I m done with all this crazy alien no air Twilight Zone bunk! Talk!"

* LEONARDO
I think I still have blue smoke in my brain. We're still in New York... a hundred years in the future? And aliens live here? And buildings fly? And--?"

Another inferior substitution for this original:

"LEONARDO
You mean we're still in New York... a hundred years in the future?"

Please, let's remember that these Turtles ARE NOT STUPID!!! The idea that they might be in the future MUST have occurred to them, especially after just having seen the Empire State building in a previous scene. Leo sounds like a complete moron as written here.

As I said in my previous set of comments, these misidentification gags are painfully DUMB. Let's get rid of them and not waste time and lines on dopey stuff like this.

"* CODY
How did you ever tell them apart?
* SPLINTER
Color coded diapers.
* DONATELLO
Do they still have the saying   TMI? Too much Information?"

This is an excellent example of "going over the line" with silly, dopey, inappropriate-to-character humor. This hurts my brain. Remember -- CODY IS THE BIGGEST TURTLES FAN IN THE ENTIRE FREAKIN' WORLD! HE KNOWS HOW TO TELL THEM APART! Jeez...

"CODY
2105 is no place for a mutated turtle from the twentieth century! He ll be torn apart out there! Come on--!
SERLING - <WHIRS> over and blocks Cody's path.
SERLING
Master, while I m certain you feel pity for these wretched things, you shouldn t just up and leave the house."

Again -- is Cody not PERMITTED to leave the house or is he too agoraphobic or timid to leave the house? I thought it was the latter. But whichever, it's important to decide now. I think it makes Cody a more interesting character if he has to fight his own fears about going outside.

"SERLING
(explaining to Turtles/Splinter)
Master Jones is the owner of O'Neil Tech, a prominent manufacturer of terran technologies
DONATELLO
As in   April O Neil? You go, genius!"

Don's line is dopey... more of a Mikey line, but I don't even think it would be good for him. It's also very obvious... we just saw a page or so ago that Cody is April's descendant. Why is Don then so surprised?

"* MICHELANGELO
(Bubbling)
How hard is it to find three talking turtles and a rat in this place? "

While I am not in any way opposed to a good Raph jab at Mikey's bodily habits, THIS is just plain dopey and makes NO SENSE.

"* RAPHAEL
Mikey stinks. Check.
*WIDEN - All react to an urgent <KLAXON> as <ENERGY CRACKLES> out of the TIME WINDOW, knocking Raph on his shell!
*LEO AND DON  help Raph to his feet &
* RAPHAEL
It was just a joke --"

Dopey. Who is Raph talking to? Why would he think that his stupid little joke about Mikey caused anything to happen?

"ON HANGAR - The doors slide open, revealing THE HOVER SHELL - a sleek new Turtles-inspired hover vehicle.
* LEONARDO
You have way too much time on your hands."

Why is Leo being such an asshole here? Totally out of character, especially under the circumstances. Another dumbass "throw in a joke" bit -- who cares if it's not at all appropriate to the situation?

"MIKEY'S POV - The Alien Street Vendor is gone. The alley is empty, save for a HOVER TRANSPORT, parked at the end.
* MIKEY
Great. Where am I now? Invisible town?"

That should be "mentioned", not "mention".