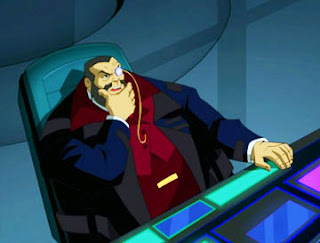 "SPLINTER
Good…Good!  These may very well replace the weapons you lost in space-time…!"

I don't feel that Splinter would be as happy as he seems here that the Turtles would adopt these wacky weapons to replace the ones they lost -- at best, he would accept them grudgingly. Also, the phrase "lost in space-time" seems a bit unnecessarily "techy" for Splinter and the situation -- I would end that line at the word "lost".


"Very minimalist" does not sound like a phrase Raph would use. Don or Leo, maybe.

"CODY
We can order anything you want on the Outernet!"

I can see why we might want to invent a new name for what corresponds to the "Internet" in the future, but I feel "Outernet" is inappropriate and silly.

"DONATELLO
(hopping around; excited)
Can we?  Can we?  I’d love to see some replicators!  Can we? "

While I can certainly see how Don would be very excited, I don't think he would sound this infantile.

"ANGLE ON THE DOOR – as SERLING <WHIRS> in, holding a DUSTPAN with debris in one hand, a WHISK BROOM in the other.
MICHELANGELO
Hey, Cody, your maid’s here!/Hey!
SERLING swivels his head to look at Mikey sourly, DUMPS the debris in his dustpan into Mikey’s hands, then turns to Cody."


There is probably something funny that can be done here with Serling being offended/irritated by Mikey's comment, but dumping debris into Mike's hands seems very silly to me. An even better question might be -- should Serling be doing such menial work? Wouldn't there be cleaning robots that could handle this kind of stuff -- and would they really use whisk brooms and dustpans? That seems very low tech and pre-20th century to me.


Perhaps instead of bringing in a dustpan filled with debris, Serling could be holding a larger piece (or several large pieces) of something that got broken in the training battle, which he could similarly drop in Mikey's arms.

"DARIUS
Cody, what’s this I’m hearing about you being out and about, yesterday…? Constable Biggles says you were consorting with strange aliens!
IN THE SHADOWS – RAPH starts forward, but LEO restrains him.
RAPHAEL
(whispering)
“Strange aliens?!  I oughtta –“
LEONARDO
Shh!  Be cool!
DARIUS
I hope you’re not worried about the company…I have it under control!"

There seems to be -- to me at least -- some kind of disconnect between Darius' first and last lines here. I don't see how he gets to Cody being "worried about the company" from what he says first.

"RAPHAEL (O.S.)
This Hovershell’s a lot like our old one…You really are a superfan!"


I don't believe the Turtles ever had an "old one", i.e. an old Hovershell. Perhaps this line would be better if it went as follows:

"RAPHAEL (O.S.)
This Hovershell’s a lot like our old Battleshell…You really are a superfan!"

Please, even though we are in the future, let's not overdo it with the pizza references.

"CODY
He runs O’Neil for me.  He says I wouldn’t understand a lot of the business, and he’s probably right…"

It sounds a bit odd that Cody refers to his business as just "O'Neil". Perhaps "O'Neil Tech" would sound better.

"DONATELLO
That is why I think we should take a field trip!  Instead of bringing the gear here, we will go THERE!"

Don's lines here puzzle me a bit. He has no idea how large these replicators that Cody mentioned earlier are. Also, he seems to be saying that the reason to take a "field trip" is because Darius told Cody he shouldn't go out which seems oddly petulant and contrary for Don.

"SERLING moves forward, waving his arms.
SERLING
So you can do to Cody what you did to the parlor?  Brilliant idea!/<Eep!>
RAPH <HIP-CHECKS> him, sending Serling rolling O.S.
RAPHAEL
Whaddaya say?  It’ll be fun!"

I can see how Serling might be worried that the Turtles might get Cody involved in some hijinks, but not that he would worry that they would "do to Cody what you did to the parlor" (i.e. smash him up). That seems to be overreacting even for Serling.


Also, is Serling standing on roller skates or ball bearings? I don't see otherwise how a "hip check" from Raph could send him "rolling".

"LEONARDO
Serling might have a point, Cody… Trouble does kinda follow us around…
OTS CODY – Behind Leo, Donny, Raph and Mikey all gesture excitedly to Cody: “Come on!”
CODY
I’m in…As long as we’re back by lunch!
He to the Hovershell. Leo’s brothers enthusiastically follow.
DON/RAPH/MIKE
Atta way!/Yeah!/Let’s bounce!
Leo turns to Splinter.
LEONARDO
Coming, master?"

It seems weird to me that the other three Turtles ignore Leo's thoughtful comment... and then Leo ignores it himself.

"SPLINTER
No, my son.  I am confident you can handle this, and besides…it seems my soap opera has survived these hundred years…I have much catching up to do…"

It seems silly that Splinter's soap opera would have survived that long -- perhaps it would be better if he said something about wanting to see how soap operas had changed in 100 years (if they still exist at all).

"RAPHAEL (V.O.)
So, this Darius Dun guy runs O’Neil?
A WINGED HUMANOID FIGURE (a (GUNJIN) – mostly SHADOW, flies under the HOVERSHELL and attaches a SMALL HIGH-TECH DEVICE to the Hovershell’s belly.  It begins to BLINK.
CODY (V.O.)
Technically, no.  I’m in charge.
INT. HOVERSHELL – CONTINUOUS
CODY stands behind DONNY, who pilots.  The others stand nearby.
MICHELANGELO
Anyone told him that?
CODY
He says there’ll be plenty of time for me to work…so he handles the day to day stuff, keeps the company from going –"

Now I'm confused. This seems to completely contradict Cody's previous answer in the last scene, when he told the Turtles that Darius "runs O’Neil for me."

"DONATELLO
It was not me!  Something has seized command of our controls!"

I think "wasn't" sounds more natural than "was not".

"CONSTABLE BIGGLES – stands beside his CAR as a DEPUTY walks toward him from a COFFEE SHOP, loaded with TO-GO CUPS.
BIGGLES
First rule of law enforcement, Deputy…never start the day without tea!/<Whoop!"

Obviously, if we decide to make Biggles a robot, this tea thing is not appropriate.

"Suddenly, the HOVERSHELL <WHIZZES> overhead, so close that its wash SPILLS the DEPUTY and BIGGLES into each other, <SPLASHING> them both with TEA!  Beat.
BIGGLES
Right, then, we’ll need more tea."

This seems like a very weak joke, and the passivity doesn't fit the personality of Biggles as has already been establish in episode 118.

"DONATELLO
I have not learned these systems!"

Why is Don sounding like Data from "STAR TREK: The Next Generation"? He CAN use contractions, you know.

"CODY
There’s…there’s one thing we could try…an experimental feature…But we’re not supposed to do this in the air!"

SO... just when ARE you supposed to use this emergency escape pod? The thing subsequently survives the following:

"<WHANG!> The SPHERE <SLAMS> down on an ELEVATED ROADWAY and races ACROSS the road PERPENDICULAR to oncoming TRAFFIC!  Cars <SCREECH> and SWERVE!  <HONKING!>  The CAPSULE plummets off the opposite edge of the roadway!
<SMASH!> Continuing DOWN, the capsule smashes through a TIMES-SQUARE-ESQUE FLOATING BILLBOARD advertising a GOLF COURSE (a FLAG next to a HOLE).  The capsule goes RIGHT THROUGH THE HOLE, and out the other side!
<THOOM!> The capsule hits a ROOFTOP, and ROLLS to the EDGE, where it TEETERS fifty stories above the street!"

... and a fifty-story drop into a dumpster. Not only that, everyone inside it is unharmed. So... tell me again why you're "not supposed to do this in the air!" It seems like that's EXACTLY what you're supposed to do with it.

I think "occasions" should be "occasion".

How old is Cody again? And how old is this " beautiful ALIEN SCIENTIST"?


I also don't see why Cody calls the Turtles his "lawyers". Certainly we could think of something more appropriate and funnier.

"LEONARDO
There’s no way we can keep up with those guys on foot…!
DONATELLO (O.S.)
Wow…
FAVOR DON – as he curiously examines some EQUIPMENT stacked against a wall.  His brothers watch from behind him."

Don's "Wow..." seems really out of place at this moment.

"THE TURTLES look forward, express shock.
DONATELLO/MICHELANGELO
Oh no.
BIKE POV – The BRICK WALL fills frame and <BAM!> CUT TO BLACK.
RESUME, NEW ANGLE – as DON and MIKEY pull themselves woozily out from under the WRECKED BIKE, and watch as the bad guys FLY AWAY…"

As it would seem to be a fatal crash given the speeds they seem to be going, perhaps it would be good if we saw Don attempting to "put the brakes on" and the rocket bike decelerating some before the crash, instead of just staring stupidly at the wall as it hurtles toward them.


And unless that wall was invisible, isn't it kind of silly -- no, make that REALLY silly -- for Don to be driving toward it pell-mell if he didn't feel he had some way to stop before hitting it? The more I think about it, the more this action on Don's part seems terminally dopey. What WAS he thinking?

"SERLING
(through speaker)
Master Cody had all five of you linked by homing beacon…you imbeciles.  Feeding you his coordinates now…"

Why doesn't Serling share this information with the police -- ESPECIALLY given his ill will towards the Turtles? Why would he depend on THEM to rescue Cody?

"EXT. EMPIRE STATE BUILDING – ROOF – RESUME
DOWN ANGLE – CODY falls away from the roof, starting the long descent to the street!
MICHELANGELO looks over the edge in panic, and reaches out before being GRABBED BACK by the GUNJIN LEADER."

Why pull Mike back? Wouldn't his foe more logically try to kick or push him OFF the building?

"DOWN BELOW – LEO JAMS his KATANA into a BUILDING’S STONE SIDE, and PULLS DOWN, BENDING the sword.  It <SNAPS> back, FLINGING him into the air to grab the UNDERCARRIAGE of a passing HOVER-VEHICLE!  He scrambles to its ROOF, then leaps off – onto the back of another GUNJIN!"

This "super-springy" sword bit is more than I can take. Very silly.

"EXT. NEW MANHATTAN – STREETS – MOMENTS LATER
The TURTLES run down the street TOWARD US, watching the SKY.
LEONARDO
Stay with them!"

I just realized that this action is odd -- they've already rescued Cody (the whole point of this exercise). Why are Mike, Don and Leo then ABANDONING him and Raph and chasing the Gunjins? Given that they don't really know how many of these flying guys might be hanging around, shouldn't they all regroup and protect Cody?

"DONATELLO
(noticing his surroundings)
Oh, sorry…Did we interrupt something?"

This kind of wiseass comment is more Raph or Mike than Don.