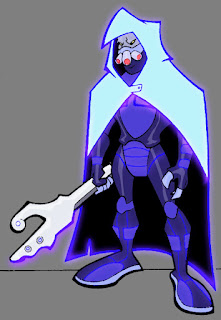 "Leo (VO): “It was supposed to be a simple night on the town.  Me and Raph were gonna check out what passes for entertainment in the twenty-second century.”"

Leo would say "Raph, you've got to get out of there."

"Leo draws one of his new swords and tries to cut through the titanium cage.  Sparks fly, but the metal is undamaged.  Leo starts hacking away at the metal.

Leo tries to “coach” his brother as he continues to chop at the titanium cage.  Raph gets up and starts to dodge the Fat Lady."

If the metal of the cage continues to be undamaged, it would seem to be unwise for Leo to spend any more time hacking at it.

"The Announcer, meanwhile, has followed them and continues to regale his audience with an increasingly florid account of the melee."

Perhaps it would be a good idea if the Announcer's seat was actually part of a platform which could become a mobile camera rig.

"Witnessing the crime, the Turtles race off to retrieve the stolen goods…except for MIKEY (who’s distracted by some new-wave toy) As the Turtles take off, Don yells to Mikey that he has to STALL  for his presentation. “This day has to be perfect for Cody!” Mikey redirects Cody and Starlee, doing his best to cover… "

Perhaps it would be good if Don was shown to be torn between staying at the show and going off to fight the Street Phantoms.

"Meanwhile, we intercut to Mikey who is desperately trying to decipher Don’s notes, making a mockery of history to all the kids.  Giving up, Mikey tries to ad-lib, remembering what his brothers said was cool about the 20th century, beginning with COMBUSTION…


Cody is mortified as Mikey mixes chemicals and blows up half the stage."

Perhaps it would be a good idea to know where Mikey gets these explosive chemicals. It doesn't seem that Donatello would be using them in his presentation. Perhaps we don't need an explosion -- maybe Mikey can do something funny based on 20th century pop culture.

"By this time Mikey has clobbered a bunch of plastic standees decorated to look like FOOT NINJA. The kids are thoroughly confused, and Starlee isn’t taking this well."

I'm not sure why Mikey has decorated plastic standees as Foot Soldiers. It seems a bit obscure.

"All except Mikey, who admits that he just wants to read a comic book… except that he burned them all up."

I am confused by this. Where did the comic books come from? I thought that in the beginning of this premise, Leo is complaining about the fact that there aren't any paper books in the future.

"INT. ACCESS TO SURFACE - SECONDS LATER
Splinter and the Turtles make their way upwards, <HUFFING AND PUFFING>, their movements slow and lumbering.
DONATELLO
Is it... just me... or is it... really hard... to breathe... all of a sudden?
** MICHELANGELO
Yeah... like my chest weighs a ton. And my legs…and my—WHOA! "

So far I have commented at least twice on how odd this bit is, and it continues to stay in the script. Given that we have several other moments like this which make more sense later in the script, this one seems to me to be extraneous and not particularly well-placed. Please remove, or supply a good rationale for why the atmosphere and gravity in this particular underground access tunnel from their lair should be different from "Earth normal".

"SERLING - <SNAPS> the belt around Raph's waist, and instantly the turtle takes a <DEEP BREATH> and springs to his feet!
* RAPHAEL
Hey! The walkin’ toolbox turned the air back on! And my legs too!"

The timing of this bit is very odd. Why are the Turtles and Splinter still experiencing the negative effects of other gravity/atmosphere when they are on the landing pad of Cody's penthouse? Does it make any sense that either this landing pad OR the limo that Serling uses to pick up the Turtles would have either gravity or atmosphere which are not "Earth normal", given that both of these things would be used by Cody, who is a normal human? Perhaps this bit of action would be better placed directly immediately after Serling picks up the Turtles and Splinter, when they all get into the limo, and might logically be said to be still feeling the effects of the different zones. This might actually add to the sense of "faux danger" if Serling immediately tries to put the guys into what SEEM to them to be some kinds of restraints. And it might also make sense that he CAN do this (perhaps while putting the limo on autopilot back to Cody's apartment) while they are still a little disoriented and weakened by the effects of the gravity and atmosphere zone they were just in.

"** LEONARDO
Look, Threepio, we appreciate you helping us breathe --
SERLING
The name is Serling, sir."

Leo sarcastically calling Serling "Threepio" sounds out of character for him, more like something Raph would say. Perhaps it would be better if he fumbled for what might sound like -- given their circumstances -- an appropriately respectful name for this robot. Or even something as simple as having him start his line like this:


... might be enough to take the "wise guy" attitude out of his line.

"REVERSE - A 14-year-old kid stands just in the shadows, framed in a doorway to a SIDE CHAMBER, eyes wide with awe.
CODY
You're a lot taller than I imagined... greener too."

Apparently no one but me finds this strange, so I'll only comment one more time on it: For -- apparently -- the sake of doing a "mistaken identity" gag three times in this script (a gag I don't find particularly funny), we have to swallow the (to me, anyway) huge illogic of this premise: That Cody, super-Turtle fan #1, who has the following in his "trophy room":


"REVERSE ANGLE TO REVEAL - A SHRINE TO THE TURTLES! Wall to wall bits of memorabilia, old newspaper clippings, the TCRI canister, a Shredder helmet, even the Turtles' masks. And at the center of it all... CASEY JONES' HOCKEY MASK, GOLF BAG, BATS, HOCKEY STICK, ETC. "


... doesn't have ONE SINGLE IMAGE of the Turtles. To my mind, that makes no sense at all. Especially when you consider the fact that Cody had a "time window" machine to peek in on the Turtles in the past. It has been suggested that he never got enough time to actually LOOK at them through the time window before it inadvertently became a time PORTAL, but that seems like tortured logic when you consider the following scene:

"* The FLOOR OPENS at the Turtle’s feet. They jump back as…
* WIDE - an impressive array of machinery floats up through the hole in the floor… the TIME WINDOW! An IMAGE OF THE TURTLES' LAIR (as it is in 2105) appears on a circular monitor set in the center of the device."

So we are asked to accept the idea that the time window worked to get a view of the lair, sans Turtles, but NOT any views of the Turtles themselves. All this illogic for -- in my view -- the service of a pretty silly gag.

"* CODY
Unfortunately, yes. The four of--
(beat, realizing)
Hey, where IS number four?"

Perhaps it would be a good time to point out that it has taken Cody -- boy genius AND #1 Turtle fan, remember -- this long to realize that he has only three Turtles in his presence.

"ON HANGAR - The doors slide open, revealing THE HOVER SHELL - a sleek new Turtles-inspired hover vehicle.
** LEONARDO
Now that’s cool... but you have way too much time on your hands."

Perhaps I am missing something, but I still don't see why Leo is being so sarcastic and nasty to Cody. What is the point of this insult? I would take out everything in this line except "Now that's cool..." or give the insult line to Raph.

I'm pretty sure that should be "mentioned" instead of "mention".