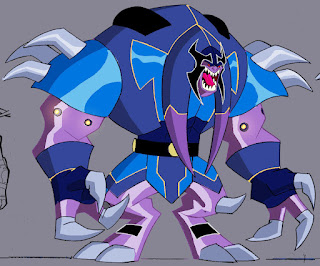 One of the notes we got from Playmates on the bible for TMNT 2105 was that they wanted us to create one main villain that was controlling all the other villains.  In our talks we discussed perhaps making Darius Dun more of this main villain type, but the more I discussed this with the story editor, the more he began to feel like a second rate Oroku Saki/Shredder type of character.  Instead, we shifted gears and decided to try the following.  Give it a read and let me know what you think.  It’s just a preliminary idea, but if we like the general concept we will flesh it out as we go.

If Ambassador Dirge smiles at you, your blood would freeze in your heart.  Deadly as a cobra, powerful as a lioness, slippery as a mongoose, Dirge is a wolf in ambassador’s clothing.  Appointed to the inner council of the Pan Galactic Alliance, Dirge seeks to undermine the peace and harmony while testing the Alliance for possible weaknesses.  But why?  Why would she do such a thing?

Well, unbeknownst to anyone but those of us working on this here series, Dirge has a secret agenda.  She is an advance agent for a deadly race of beings long thought dead; a race of shapeshifting beings that have their sights set on taking the Earth for their own nefarious purposes.  They are known only as the Sh’oka.

The biggest problem Dirge has to contend with is her fellow council member, Alliance President Bishop, who won’t take his eyes off her even for a moment… blast him!  He suspects something is not quite right with her.  But Bishop has no idea just how dangerous the truth really is.  He has no idea that Ambassador Dirge is really…

In 2105 the Sh’okaNabo is thought of as a cautionary tale, a dark myth, a twisted wives’ tale, a boogieman frustrated parents conjure up to get their defiant kids to sonic their teeth and go to bed.

But we are here to tell you that Sh’okaNabo is no myth.  It is a devious, ruthless, relentless, shape-shifting creature that lets nothing stand in it the way of its purpose: survival for itself and the rest of its race.

In 2105, the Sh’oka, one of the oldest and most feared races in the universe, have found themselves in need of a new homeworld, and they have set their sights on Earth.  They have sent one advance agent, highly trained, incredibly skilled, amazingly strong, disturbingly lethal, and have planted this covert op among the denizens of New Manhattan in the role of Ambassador Dirge.  Part of the fun over the course of these 26 episodes will be revealing which 2105 Turtle villain Sh’okaNabo actually is.

Sh’okaNabo will spend much of its time in New Manhattan bullying and manipulating the other villains, pulling their strings, all in the service of its ultimate goal: to steal the Earth so it can be used as a homeworld for its own people!"


I think these two identities both have potential, but there are a few things that to me seem problematic. First is the obvious comparison to the STAR WARS duality of Senator Palpatine/Darth Sidious. Do we care? Does it matter?


Second, I don't see exactly how "bullying and manipulating the other villains, pulling their strings" leads to Sh'okaNabo's goal to "steal the Earth". How does it get "stolen"? Also: How many others of Sh'okaNabo's species exist? Where are they? How are they going to use Earth as a new homeworld? Are they all on a spaceship or spaceships somewhere? How have they escaped detection up to this point? Why Earth and not some other, less heavily populated and defended planet? Earth is also now home to lots of alien species -- does Sh'okaNabo's species want all these aliens to know that its species still exists? Why do they need a new homeworld? What is there about Earth which fits their requirements? Are Sh'okaNabo's species TRYING to stay hidden? Why are they "one of the oldest and most feared races in the universe"? If they are seen as such, do all the other species who are aware of them have special procedures used to detect them? Or are you saying that as this point, the Sh'oka are believed to no longer exist except as nightmare figures from the galactic past? Was there some great war in the past to eradicate them?


The other big problem here is one faced by any show which uses shapeshifters as villains -- DEEP SPACE NINE barely pulled it off -- which is that it quickly becomes tedious ("Is he one of them? Is she?" etc. etc. blah blah blah). It's one of the reasons the new BATTLESTAR GALACTICA has lost my interest. You also run into a problem of logic -- if these shapeshifters are so good at it that they can fool anybody, why don't they just arriveen masse, slither their way undetected into the population, and then kill everybody? They would certainly have a great tactical advantage, taking everyone by surprise.


To sum up, I guess what I'm saying is that I'm not opposed to this idea, but I think it needs to be thought out some more. Actually, a lot more.


P.S. Maybe the whole "stealing the earth for a new homeworld" angle is not the best angle. Maybe the Sh'oka don't really want Earth, they want PAYBACK (perhaps for the genocidal war which nearly wiped them out), and they are targeting Earth because it is now the most prominent galactic center of commerce, trade and politics.


P.P.S. I know that you said in a recent email something to the effect that we don't need to do the "Utroms on Earth" thing as I have done in the new comics, and I agree with you. BUT... let's turn that around and ask: Why NOT do it? Is there any compelling reason to not use that as part of the backstory about how the Earth joined the Galactic Fellowship (or whatever we're calling it)? Maybe 90 years ago the Utroms arrived as in the comics and that kicked off the process which brought all the other aliens to Earth.
I'm not married to the idea, but I think there are at least two good reasons to use it:


-- it's a nice way to bridge the gap between the animation and the comics, and the fans of both would dig it


-- the more I think about it, if we DON'T include the Utroms in this new future Turtles scenario in some significant way, their absence will feel VERY weird, given that we have already established their close connection to Earth over the last three seasons
Posted by PL at 6:58 AM

Email ThisBlogThis!Share to TwitterShare to FacebookShare to Pinterest
Labels: 4Kids TMNT show, Blast from the Past, development, Fast Forward