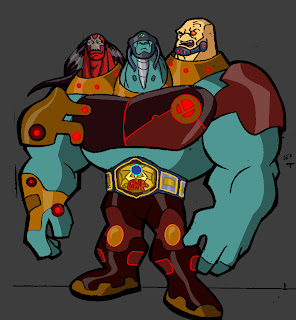 "TEASER
FADE IN:
EXT. FLOATING SKYSCRAPER – ROOF – SUNSET
ESTABLISH Cody’s luxury building in Uptown.  The sun sets behind the spectacular futuristic skyline.
ON THE ROOF – SPLINTER emerges from a rooftop doorway, holding a pot of living bamboo.  He carries it over to the beginnings of a GARDEN that he’s building.
SPLINTER – sets down the pot and glances over at something OS.
HIS POV - RAPHAEL stands at the edge of the roof, SILHOUETTED by the setting sun.  He gazes out at the city, deep in thought."

Just a suggestion -- maybe it would be cool to start this scene with a little "fool the eye" approach. By that I mean DON'T show the futuristic cityscape right away -- instead, frame the shots and angles carefully so that you only see Raph and/or the plants in the garden Splinter is making in closeup or medium closeup, against the beautiful sunset. The idea here is to temporarily fool the viewer into thinking that maybe Raph and Splinter are back in the past, or in some bucolic location. And then, only when Raph starts complaining, pull out or switch to a different angle to show the real setting.

"SPLINTER
I am building a rooftop garden.  A place of serenity and peace—
<HOOOONK!>  A loud HORN pierces the serenity.  Splinter cringes, and he and Raph look up at:
A HUGE ADVERTISING BLIMP – cruises by overhead.  It’s covered with bright VIDEO SCREENS (think Blade Runner).
SPLINTER – frowns.  The best laid plans...
THE BLIMP – cruises slowly past.  The screens display graphics promoting the “GALACTIC WRESTLING FEDERATION” and their upcoming “123rd SLAM-A-THON,” including LOGOS and moving images of various human and alien WRESTLERS in action.  Very gaudy."

I wonder if it would be cool to have this blimp be SHAPED like a big wrestler, so that when it comes into view, Raph and Spinter might VERY briefly (like, a couple of seconds) go into fight mode, thinking it's some gigantic foe about to land on them... until they realize it's just an advertising blimp.

"ANNOUNCER (VO – THRU BELOW)
The Galactic Wrestling Federation presents the one-hundred-twenty-third Slam-a-Thon.  See all your favorite wrestlers battle it out for the title in a cage match finale.  Tonight at Madison Square Garden."

Not sure if this would work, or if there are any rights issues that we don't want to get entangled with (I don't think there would be, but ya never know), but... it occurred to me that it might be fun to use, either as foreground or background characters in this whole wrestling thing, some of the "space wrestlers" that were in the old Archie TMNT comics. Might be cool for the fans.

There's absolutely nothing wrong with Serling's last line here, but I thought perhaps a better one might be a line that connects to Mike's "get himself out of trouble" bit, perhaps as follows:

"SERLING -- Trouble that you hooligans will surely get him INTO!"

This line could actually be followed by the existing line about the antiques.


5.) In the bit where Raph tries to get one of the other Turtles to go with him to the wrestling match, perhaps he could ALMOST sway Mikey with visions of junk food that would likely be served at the arena -- hot dogs, greasy cheesy nachos, etc. -- but then Cody enters the room with the video game and Mike goes for that.


6.) I have to say that Triple Threat is a much better character than the Fat Lady. Bravo to whoever came up with this idea.

"RAPHAEL
Somebody throw a chair or something!  This is the worst wrestling match I’ve ever seen--!
An entire ROW OF CHAIRS suddenly <CRASHES> into the ring!
QUICK REACTION SHOTS – Raph... Leo... The Wrestlers...
LOW ANGLE – Triple Threat makes a DRAMATIC ENTRANCE as he LEAPS into the ring beside the chairs."

I'm a little unclear about what is happening here. From where is Triple Threat entering the ring? Above? Below? From one side? If he has to walk in from the edge of the crowd, you would think he would be noticed BEFORE he reaches the ring, and cause some reaction. And is it HE who throws the "entire row of chairs"? Maybe it's a little much to throw a whole row of chairs. And are these chairs EMPTY or are there patrons sitting in them? Literal Laird needs to know!

"ANNOUNCER (VO)
A Turtle Man has entered the ring, and they’ve lowered the Tritanium Cage."

"A Turtle Man" sounds pretty silly, here and where it is repeated later. Perhaps something else could be done. Here's an idea: Maybe when Raph climbs into the ring, the Announcer notices that there are TWO of these Turtle-looking beings. He sends out a small flying camera drone/remote microphone which starts buzzing annoyingly around Raph. Through it, the Announcer asks Raph who the heck he is -- what is his "wrestling name", and so on. Raph -- who is really getting into this wrestling bit -- has a flash of inspiration and says to the drone "You can call me -- Tengu Warrior (or Tengu Terror)!" Then, as the Announcer keeps squawking through the drone, Triple Threat grabs and CRUSHES it, sprinkling the pieces onto the wrestling mat.

"ANGLE – Raph swings across the bars... but Triple manages to GRAB one of his legs!  He pulls, and Raph hangs on...
RAPHAEL
<gah!>  Leo!  <strains>
LEO – finishes cutting open a large HOLE in the cage, reacts:
LEONARDO
Put him down!
TRIPLE – manages to PULL Raph free.
NASTY HEAD
Whatever you say...
He WHIRLS Raph around and HURLS him!
TRACK RAPH – He hurtles through the air, SLAMS into Leo, and they both go TUMBLING through the ropes and out of the cage!"


"RAPH AND LEO – lie in a heap, unconscious.  Triple hurries past."

Given what these guys have been through in the past, I doubt simply being thrown out of a wrestling ring would knock the unconscious. Perhaps they just have the wind knocked out of them, or better yet, they're tangled up in a mess of chairs and other patrons.

"LEO – takes his Credit Stick from the Cab Driver...
LEONARDO
Keep the change."

Might be funny to add a line from the Cab Driver here after Leo's "Keep the change" line. The Cabbie could -- with a puzzled look -- say "What is... change?"

"LEONARDO
Use you head this time, Raph."

"ANNOUNCER
The Whirling Feets of Fury!"

"THE ANNOUNCER – TEARS off his shirt with crazed excitement:"

"INT. CODY’S PENTHOUSE – LIVING ROOM – NIGHT
Raph and Leo enter; they look exhausted.  Raph carries the Belt.
ANGLE – Mikey, Don, and Cody sit in front of the holo-screen, totally absorbed in the 3-D HELIX video game.  Mikey hears them enter and turns to wave them over:
MICHELANGELO
Raph!  Leo!  Come here!  You have got to check out this game!
FAVOR RAPH – He exchanges a weary glance with Leo.
RAPHAEL
I’ve had enough for one night.
He walks off...
EXT. FLOATING SKYSCRAPER – ROOF – MOMENTS LATER
Raph sits in the rooftop garden, alongside Splinter, deep in meditation...
FADE OUT.
END"

While I like the image of Raph meditating with Splinter, this ending seems, somehow, a little... flat. Not sure how to make it better.


Here are my three notes on the ep120 final. This is improved significantly, but there are still a few "stubborn stains" that remain from past drafts.

Thank you for adding the "scanner beam", but -- as funny as the idea of plucking nose hairs is -- it should probably be clear to this robot that Raph (like all the Turtles) has no nose to have hairs in. Perhaps we could substitute a spinning polishing pad for the tweezers and "Buff your beak?" for "Pluck your nose hairs"?

"LEONARDO
Master Splinter!
Leo rushes to Splinter who wobbles unsteadily on his feet. His fur is comically frizzed out.
* SPLINTER
*(dazed & wobbly)
Perhaps it would be wise to sit this one out. (groaning FAINT!)"

Splinter's line is STILL dopey and un-Splinterlike. And inappropriate. And unnecessary.

"** SPLINTER
I believe so, Leonardo. Still, our experience with Viral was...
** He touches Mikey’s arm with the finger. ZAP! Mikey is shocked with a jolt of residual energy.
** SPLINTER
… somewhat shocking. "

I'm glad the dopey frizzy hair gag is gone, but this "residual energy/shocking Mikey" thing is STILL as dopey as it was. What is Splinter here -- a BATTERY? And hasn't it occurred to anyone how un-Splinterlike this action is -- DELIBERATELY causing one of the Turtles pain for NO REASON other than -- TEE HEE! -- it's "funny"? (Yes, I know Splinter has whacked one or more of the Turtles over the noggin with his walking stick in past episodes -- but that was for a REASON, i.e. they were misbehaving, not listening to his lessons, etc. Here, Mike's not doing anything -- he's just innocently standing there.)