Day three of the 2009 NYCC was much like the first two days -- busy! Not quite as insanely busy -- or as crowded -- as Saturday, but we were signing and sketching right up until we walked away from our tables for the last time.

Here are a few images from day three.

I got Mirage Studios CEO Gary Richardson to pose with two Turtles at the Playmates booth. 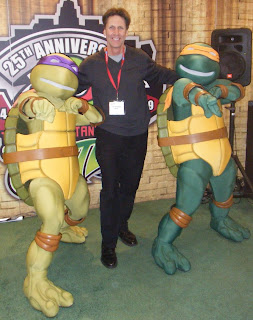 This very nice couple -- I believe their names are Jessica and Mauro -- stopped by and showed me two very cool Turtle items they had crafted. (The hand-painted thing on Mauro's necklace is either a flashlight or an MP3 player... I can't remember which.) Very well done stuff. 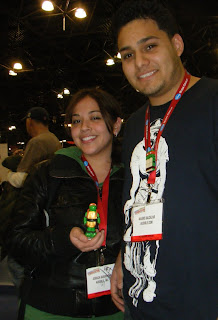 Remember the "Munden's Bar" story that Kevin and I did way back when for an issue of "Grimjack"? No? Well, this gentleman did, and he was asking people who had worked on "Munden's Bar" stories to autograph this t-shirt, and I was happy to oblige. 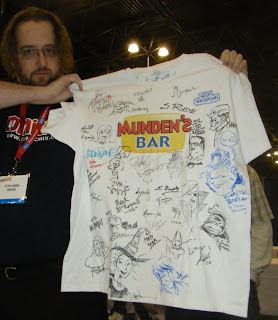 About an hour before we left, I finished this drawing which I was asked to do -- I think it is to be part of an auction to benefit the Inkpot Awards. 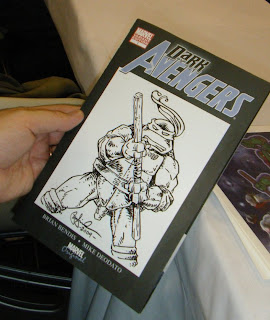 And the last thing I did before we left the show at 3PM was to sign this fan's t-shirt. 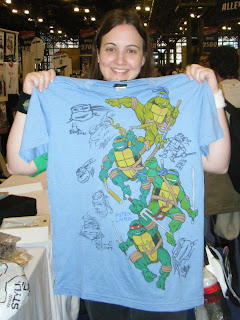 All in all, a good show. I met lots of nice people, got to hang out with my Mirage buds (including Steve Lavigne, who I don't get to see as often as I like since he moved back to Maine), spent a little time with Lloyd Goldfine (always a pleasure), and did more drawing than I've done in a while. I'll probably do it again next year (in October, I believe), but possibly just for one day. We'll see...! -- PL
Posted by PL at 7:33 AM

Email ThisBlogThis!Share to TwitterShare to FacebookShare to Pinterest
Labels: NYCC