While going through some old files, I came across some photocopies of a few pages from our preliminary work for the original Mirage TMNT comic #5, in which we took the Turtles into outer space and had them meet the Fugitoid. It's a pretty good example of how Kevin and I used to collaborate on the creation of those original comics. (I've picked two pages -- 34 and 35 -- and reproduced first Kevin's thumbnail layouts, second my dialogue polish, and third the final inked and lettered versions of those two pages.)

First we would get together and talk out the plot, trying to construct a story which held together and covered all of the points we wanted to get across in that issue. Once we were satisfied with the plot, Kevin would do rough layout drawings, breaking down each page and roughing in dialogue. 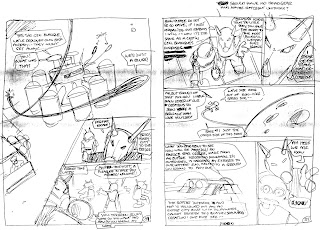 Second, I would take Kevin's layouts and do finished dialogue. 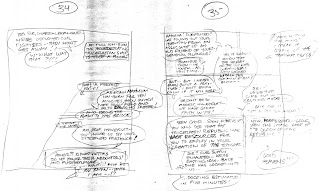 (At both the layout and finished dialogue stages, we would confer on what we had each done and address any problems either of us had with the choices we'd made.)

Third, we would pencil the full-size pages, based on Kevin's layouts, on pieces of Graphix Duo-Shade board. After the lettering had been done on the penciled pages (in this case, I believe it was Steve Lavigne who did the lettering), we'd do the final inking, and after that the toning. -- PL 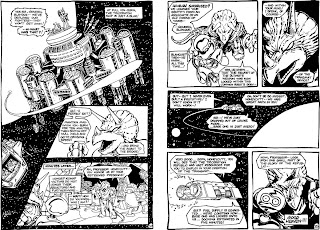 Email ThisBlogThis!Share to TwitterShare to FacebookShare to Pinterest
Labels: Blast from the Past, layouts, TMNT