I'm back in my hotel room, taking a break after the first tiring but good day at the New York City Comicon. The other guys are doing a panel discussion right now, and I'll be meeting them for dinner shortly.

It was a pretty busy day, right from the moment we found our tables. We were signing stuff and doing sketches almost immediately. A lot of nice Turtle fans came by the tables to say hello and get things signed. I'd like to single out two in particular, both of whom surprised me with thoughtful gifts.

The first was this gentleman who gave me this cool drawing of Donatello and Etrigan the Demon that he had drawn. Nice! 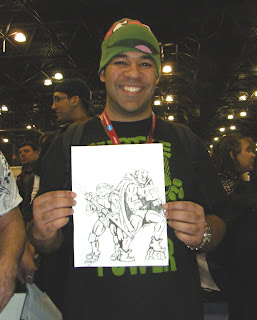 And the second was this young lady who brought me a nifty toy Triceratops. It's the small version of that big Kota from Playschool. I have the big one at home, but I wasn't even aware that this one existed! It's definitely going to join the collection when I get home. 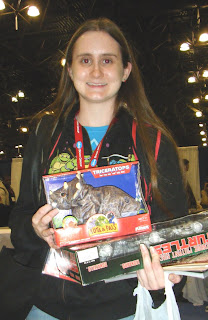 I have both of these nice folks' names... but I left them at the con! Hopefully I will remember to bring those names back with me tomorrow so I can give them their due credit. Thanks again! 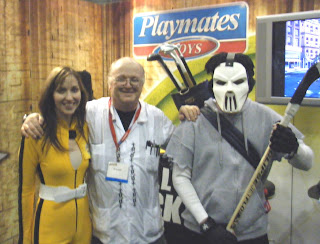 I also spent some time today signing at the Playmates booth, and after my hour there I got my photo taken with April O'Neil and Casey Jones. -- PL
Posted by PL at 3:40 PM

Email ThisBlogThis!Share to TwitterShare to FacebookShare to Pinterest
Labels: NYCC