Blast from the Past #50 repost: TMNT as drawn by Jack Kirby!

For this special fiftieth "Blast From The Past", I thought I would choose one of my favorite and most unique pieces, and one that I have Kevin to thank for. I don't know the exact process by which it came to be, but my understanding is that some time in the late 1980's or early 1990's, Jack Kirby did this 10 inch by 15 inch pencil drawing -- his interpretation of the TMNT -- at Kevin's request, and some years later, Kevin (who knew I loved this piece) graciously gave it to me. 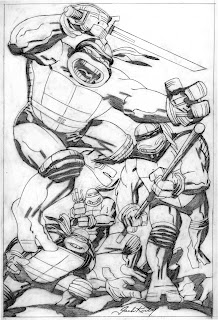 P.S. This next bit of text was run along with the above when I first posted this "Blast from the Past" entry on the planetracers.com website some years ago. It's obviously dated now, but it contains a few interesting things, so I thought I would include it here.

"UPDATE!
As Dan Berger has already indicated on the official TMNT website (ninjaturtles.com), the first issue of the new TMNT comic book is at the printer, and just two days ago we approved the proof, and they are going ahead and printing it. We have been told that it could be shipping on December 11th, so we'll keep our fingers crossed and hope for the best. Mike Dooney's cover came out great (at least in the proof), and I can't wait to see the finished product.

I messed up big time with a technical aspect of this first new TMNT issue. A bit of background -- when Jim Lawson and I worked on PLANET RACERS, I did all of the lettering on my Mac in QuarkXpress. However, instead of sending the books to the printer as all-digital files, I printed out all of the interior pages as 11 by 17 prints and sent all of those to the printer for them to shoot from (the cover I sent on disk). I did this because I was paranoid about fonts changing, balloons disappearing, art pages changing places, etc. -- all nightmares I had heard from other people who have done their pre-press stuff digitally. But with this new TMNT book, I decided to follow the example of Dan Berger (GUTWALLOW) and Jim Lawson (PALEO) and send the entire thing as a digital file. Unfortunately, I should have checked with Dan on what exact size I should make the pages in Quark -- I didn't, and I ended up having to resize the entire book, page by page, balloon by balloon, text block by text block. It put the delivery of the file to the printer back by at least a day. And now I have to do the same thing with the second issue, which I had also started lettering at the wrong size! Oh well... live and learn.

A couple of days ago, I finally accepted the fact that at the speed I am inking, this book will never come out on a reasonable schedule. Fortunately, Eric Talbot recently moved back to our area and is going to help me out with the inking, starting with issue #3. Thanks, Eric!

Several weeks ago, I had the distinct pleasure of seeing Steve Barron (director of the first TMNT movie) again for several days of meetings here in Northampton, meetings having to do with a potential TMNT project about which I can't really say anything right now. During one of our breaks, I was chatting with Steve about that first TMNT movie, and he mentioned that he had a videotape of his first rough assembly of the film, and he offered to send me a copy. True to his word, Steve got a copy of the tape to me last week, and I had a ball watching it. It is VERY rough, there are a few scenes missing (not many, though), there's no music, no finished sound or voices (curiously, in many of the turtle speaking scenes you can hear two voices - the actor in the turtle suit and the puppeteer -- speaking the same lines simultaneously!). What there IS, though, is some neat stuff that never made it into the final released cut of the film, including several fairly long scenes -- one of which is the comic publisher's office scene intended as the ending of the movie, from which I had only seen one still (I was never sure if the whole scene had been shot). There is also a wonderful extended training scene when the turtles are recuperating at the old farm, as well as many other character bits and pieces which got trimmed.

I asked Steve if he would be willing to work on a director's cut version of the film for a DVD release, and he said "Sure!" Whether or not the film still exists to use for a project like this, I don't know. But it sure would be cool! Maybe it's time to start bugging New Line...

Email ThisBlogThis!Share to TwitterShare to FacebookShare to Pinterest
Labels: Blast from the Past, Jack Kirby, Steve Barron, TMNT, TMNT as drawn by Jack Kirby, TMNT Volume 4