Blast from the Past #130: design for the "Battle Nexus" arena

Back in 2003, when I was working with Lloyd Goldfine and the 4Kids crew on the first of the "Battle Nexus" episodes, I had some ideas for how I thought the arena in which the fighters would clash could work. Basically, it was a multi-tiered area with each tier being a different shape, and divided into discreet segments. Reflecting the "elimination" aspect of the competitions, each successive tier would have half the number of segments of the tier below it, culminating in the single segment in the top tier wherein the final battle to determine the Battle Nexus champion would take place. 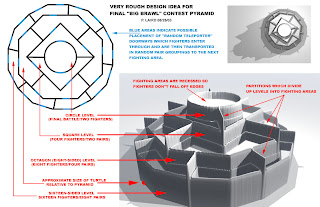 This design wasn't used as is -- I think it was deemed too complicated -- but elements of it ended up in the final look of the arena as it appeared in those episodes. I used one of my favorite 3D programs, Bryce, to rough out the design I had in mind. -- PL
Posted by PL at 5:32 PM