Blast from the Past #48 repost: Fugitoid action figure concepts

Back in 1988 or 1989, I did these drawings of the Fugitoid in the hopes that Playmates would do an action figure version of him... which they eventually did, and it was nice, but not quite what I was hoping for. Note below the somewhat desperate hyping ("think of the play value!"), and the comment about vacuum metalizing. (This is the process by which plastic is given a metallic-looking coating... I'm not entirely sure if there is any real metal involved in this process, but the end result is a very cool shiny chrome effect.) 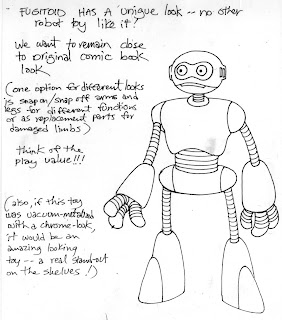 My pathetic pleading for vacuum metalizing of various TMNT figures (especially the Shredder) was kind of a running joke between me and my friend Karl Aaronian, when he was product manager of the original TMNT toyline at Playmates. When Playmates first did the TMNT toys, they had no idea how they would sell and were understandably cautious with expensive processes like vacuum metalizing... but I still bugged them to do the Shredder's armor in this shiny metallic technique, as opposed to the somewhat drab painted armor on the first Shredder figures. Eventually, they did, and it looked cool.

Anyway, my idea here was to enhance the "play value" (toymakers' jargon!) of a Fugitoid action figure by giving it a variety of removable/replaceable multi-function limbs. Cool, huh? 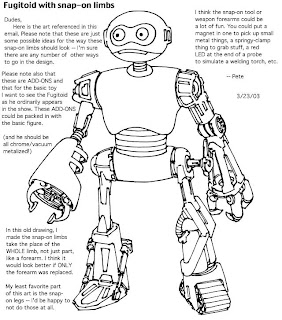 Fast-forwarding more than a decade later, Playmates did another Fugitoid figure to go along with the new Turtle toys based on the 4Kids TV show. This one was much closer in design to the original comic book character. (Note: The text in the image above was written in 2003 in reference to this new Fugitoid figure Playmates was developing, but the artwork was from the late 1980's.) Sadly, it was still not vacuum metalized. I guess you can't have everything. -- PL
Posted by PL at 7:55 AM

Email ThisBlogThis!Share to TwitterShare to FacebookShare to Pinterest
Labels: Blast from the Past, conceptual sketches, Fugitoid, TMNT, toys