Blast from the Past #131: Foot Tech Ninja design

Back in 2001, when I was working with Lloyd Goldfine and the 4Kids crew on the first year of the new TMNT tv show, one of the new concepts we came up with was the "Foot Tech Ninja" -- basically, Foot ninja with technological enhancements. (In retrospect, this wasn't a completely new idea, I guess -- you could see it as an offshoot of the original idea that Kevin and I came up with when we did the "City at War" story arc in the Volume 1 comics, with the Foot Clan splintered into several factions, one of which was tech-based.) 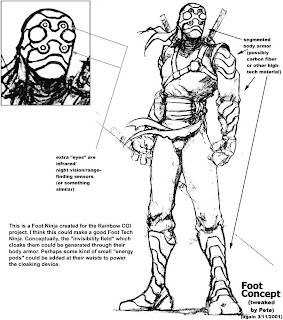 In an attempt to settle on a design for the Foot Tech Ninja, I dug out a sketch which had been done during the conceptual process for the Rainbow Studios TMNT CGI project which never materialized. I can't recall who did the sketch, but I always thought it was a nice one, and I tweaked it a bit to show Lloyd what I thought might be a good look for these guys. I think the final result was pretty close to this. -- PL
Posted by PL at 9:24 AM