Blast from the Past #49 repost: Exoskeleton concept for bad guys

In my first year of trying to come up with toy designs for the Playmates TMNT toy line, I drew this sketch for a mechanical exoskeleton, one of several designs for vehicles to be used by villains in the TMNT universe. (I'm not sure why I started to ink it and then stopped.) In this case, it was to be used by one of the Shredder's animal mutants -- the bulldog mutant dude piloting this rig was one of several mutant animal characters we sketched up for Playmates (this guy never made it to toy shelves, though). I have a better drawing or two of him around someplace -- maybe I'll post those sometime. 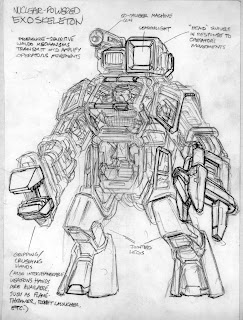 Anyway, I really hoped Playmates would make this toy -- basically because I wanted to play with it! But as I recall, we were told it was to expensive to produce, and it was shelved. Ironically, several years later Playmates produced an extensive -- and very cool -- line of toys which were almost all exoskeleton vehicles, for a property called EXO-SQUAD. I guess timing IS everything. -- PL

P.S. What's the old saying -- "All things come to he who waits"? Playmates eventually produced some nifty "Turtleized" exoskeleton-type vehicles for the Turtles in 2005 -- the "M.E.C.H. Wrekkers" line. -- PL
Posted by PL at 8:00 AM