Back before the Turtles -- or perhaps more correctly, the Turtles BUSINESS -- took over our lives, Kevin Eastman and I would often draw just for fun (imagine that!). This drawing (penciled by me, inked and colored by Kevin) was one of those done to amuse ourselves, as an affectionate homage to/parody of Jack Kirby's cover drawing for Marvel Comics' "Amazing Fantasy" #15, which featured the first appearance of Spider-Man. 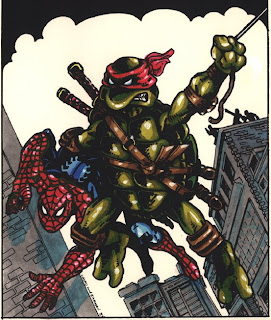 (Spider-Man and "Amazing Fantasy" are ® and © Marvel Comics.)

I'm having fun picking up the reins of my "Blast from the Past" project, and while looking through the old BftP's to make sure I don't duplicate my efforts, it occurred to me that when I was doing BftP before, it was on the Planet Racers website where it was "view only", as opposed to this blog, which allows comments. That made me wonder if it might be fun to repost all of those old BftP entries on this new blog, so people could have the option to comment on those pieces of artwork/history. What say you? -- PL
Posted by PL at 8:03 AM