Have you ever seen a "minimoto"? There was a fad for these a few years ago, and I think they're still being sold. Basically, the average minimoto is a tiny motorcycle with, I think, a 50cc two-stroke engine. You can get an idea of how large (or small) this one is by the fact that it is sitting on a weight bench in my old studio. I think it's slightly less than three feet long. Note the sophisticated starting system (the pull cord)! 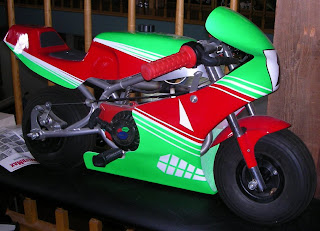 Believe it or not, an adult human being can ride these things (looking quite silly, however.) This particular one, with its bodywork painted in the original Team Mirage colors, was a gift to me from the Lashways, whose two sons -- Larry and Gerry -- were sponsored by Team Mirage to race motocross. -- PL
Posted by PL at 6:03 PM