A few weeks back Steve Murphy posted on his blog (http://the-5th-turtle.blogspot.com/2008/08/more-mystery-art.html) about this piece of art -- a framed print of which we had received at Mirage from Imagi, with no note of explanation. (It's now hanging on the all outside my office, in case you want to know.) 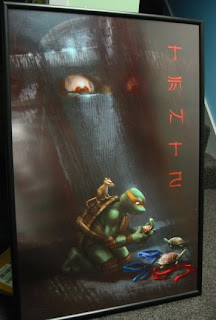 Well, I now have some info about how this art came to be, courtesy of Galen Walker, producer on last year's TMNT movie, who recently gave me a very nice copy of this same piece of art, printed on canvas. According to Galen, this art was created by an artist named Sam Michlap, who painted it after hearing a pitch about a possible TMNT movie sequel by some creative folks at Imagi. The pitch apparently involved a plot idea which had three of the Turtles affected by an anti-mutation serum, and only Michelangelo was left unaffected... and the only one who could save his brothers.

Just to be clear -- while I really like the art and I very much appreciate the fact that there were people at Imagi who were still interested in the Turtles enough to be discussing this stuff, this is not the direction we will be heading in for the next movie. -- PL
Posted by PL at 7:32 AM