"Blast from the Past" #2 repost: Pencils for cover of Tales of the TMNT Volume 1 #7

This is an interesting (and rare) collaboration between two of my favorite pencilers in comics -- Jim Lawson and Steve Bissette. Steve, as most people know, is a big dinosaur fan, and he draws them with great panache and verve. For this cover to issue number seven of the original "Tales of the Teenage Mutant NInja Turtles" (an issue that I plotted and laid out), we got him to pencil the dinos, and then Jim added the Turtles and Renet the Timestress. (Side note: Jim is also an excellent dino art guy, as anyone who has picked up his "Paleo" comics can see.) 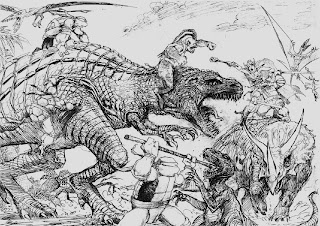 I can't remember who laid out this cover artwork -- it might have been a joint effort between Steve and Jim. I have a vague memory of those two guys working on this piece in the old Cutlery Building space that Mirage had for a few years, but I could be mistaken. Maybe Jim (or Steve) will remember and add their comments. In any event, it's a lovely piece of art. I believe it was eventually inked by Ryan Brown. -- PL
Posted by PL at 8:10 AM