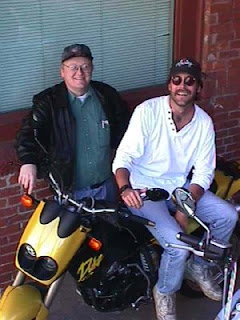 Digging into my folder of Sony Mavica floppy disk camera photos again, I came up with this one from a group of about four or five. I think we got Mike Dooney to take these for use either on the PLANET RACERS website or in the actual books (maybe both). This one shows me and Jim Lawson with a KTM "Duke", a "hooligan"-type streetbike on which I witnessed Jim do the scariest "stoppie" I'd ever seen. (A "stoppie" is kind of the opposite of a "wheelie" -- while moving forward, the rider jams on the front brake and allows the rear end of the bike to rise up in the air, the height of which is dependent on the speed the bike was going, the strength of the front brake, and the courage and skill of the rider.) This one was scary (to me, at least, given that Jim performed it as we both came up to the same stop, and he and his bike were about five feet away on my right side), but I'll also admit it was impressive. -- PL
Posted by PL at 7:53 AM