Delving once more into my archive of digital photos, I found these from our first trip to the Toronto comicon back in 2005, and seeing how some of the Mirage dudes (Jim Lawson, Eric Talbot, Mike Dooney, and Steve Lavigne, I believe) are heading there this week (in fact, I think they started the drive early this morning), I thought it would be fun to post these.

These first two are of sketches I did at the show. I can't remember if these were commissions (I rarely do full-body sketches at shows these days) or if we had a slow period during the show and I did them out of boredom. 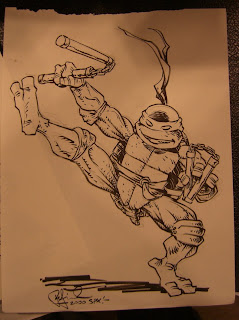 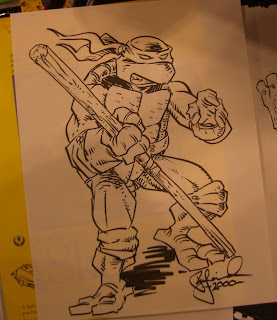 This is a really nice TMNT "group shot" sketch Jim Lawson knocked out during the show, which I think some lucky fan ended up with. 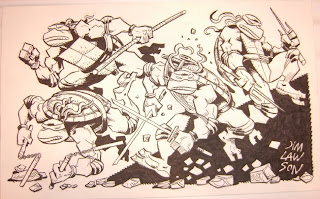 We did several touristy things while in Toronto, including a harbor boat ride, which was actually quite pleasant, as it was a hot day and the breezes off the lake were very refreshing. Here are Steve Lavigne and Mike Dooney on the boat, along with a nice view of the Toronto city skyline.

I hope the guys have a great time at the show this week. Maybe I'll join them next year. -- PL
Posted by PL at 8:40 AM