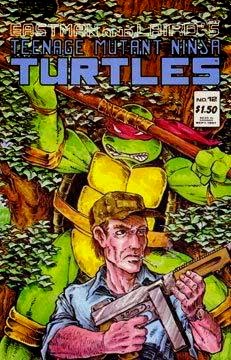 "Now we're back [from the 1987 San Diego Comic-Con -- PL] and back into the day-to-day grind. Right now, I'm working on completing the art for TMNT $12, which I am doing all by myself. I don't know if I told you about this, but Kevin and I have decided upon a new way of doing the turtle books. After three and a half years of intense collaborative effort, where each bit of story we would work on together and have to agree to, we need a change. So now, we will be alternating books -- I'll do #12, Kevin will do #13, and so on. It's kind of exciting, but at the same time scary, because we've each depended on the other for so long. I'm about a third of the way done with #12 right now, but I'm pretty sure that I'll be able to finish it in time for the scheduled September 30 ship date.

Another (hopefully) minor problem is with the animation company, Murakami/Wolf, which is doing the turtles cartoon. We just got the last set of storyboards last Monday, for episode five, in which the disembodied brain character, Krang, gets a robot body built for him by the Shredder. The problem is that the design of the robot body as shown in the storyboards was absolutely dorky -- it resembled a sick Pillsbury dough-boy. When we called Karl at Playmates about it, he said that it shouldn't be a problem -- that the actual  animated robot body would look different, as it is common practice for the storyboard artists to do quick roughs for the purposes of the storyboards. Fine and good… until Karl called us again last Friday and told us that Murakami/Wolf said that they were too far into the production of the fifth episode to change the look of the character. This we found hard to believe, and it was pretty strange because the procedure through the last four sets of storyboards is that we would get concept sketches of any new characters along with the boards, and be able to change whatever needed changing. So we told Karl that we wouldn't approve it, and we called Mark Freedman, and he called Karl, and etc. etc…. the upshot being that I think today (Monday) we'l be talking with Karl again to see what we can do about solving the problem."

[I still remember where Kevin and I were when we had the discussion which resulted in our doing separate issues -- we were sitting in Pulaski Park in Northampton, near the Academy of Music, on a sunny, warm day.
It was unnerving doing a whole issue of the TMNT comic (except for the lettering) by myself, but ultimately it was fun, and liberating, in a way. Still, all things considered, I think I would have preferred that Kevin and I had kept working in our traditional collaborative style. I never did another full issue of a TMNT comic by myself. I have great respect for people who can do issue after issue of a comic book series -- it's a lot of hard work.
But we were under a lot of pressure, mostly related to the rapid expansion of Turtle business, and that way of working together just wasn't feasible anymore. We never really had that level of collaboration again, and I missed it. I still do. But I treasure the memories of working with Kevin on those early TMNT books -- it was a unique experience.
Contrary to what I said in the first paragraph above, Kevin did not do issue #13 after my issue #12 --  issue #13 ended up being a Mike Dooney book. I can't recall why, exactly, that shift occurred, but I suspect it must have had something to do with the press of business and personal life disrupting Kevin's ability to make the deadline for publication of that issue.

The "minor problem" with the animation studio doing the new Turtle cartoon was, in retrospect, a harbinger of problems to come. As anyone familiar with that first TMNT animated series is aware, the stupid design for Krang's robot body never got changed. If we had been more on top of things, and been more willing to risk doing stuff that might have delayed -- or even canceled -- the animated series, it might have turned out differently. But this was all new to us, and we really wanted this stuff to happen, and we let a lot of things slide, this included. We were also focused on the comic books Mirage was doing at the time, and didn't have a lot of energy to devote to the animated series... and, truth be told, as could be intuited by the fact that Kevin and I had decided to stop collaborating on the comics, we were not as in synch as we could have been, and did not present the united front which might have made dealing with other business people significantly easier.
As my brother Bruce might say, "It is what it is." What happened, happened. I can't go back and change it now, as much as I wish I could.

I'm a bit sad to say that this is the last "Snippet" I will be posting, unless some other old correspondence with bits of Turtle history shows up. I doubt that will happen, but you never know. Thanks for reading these, and I hope you enjoyed them! -- PL]