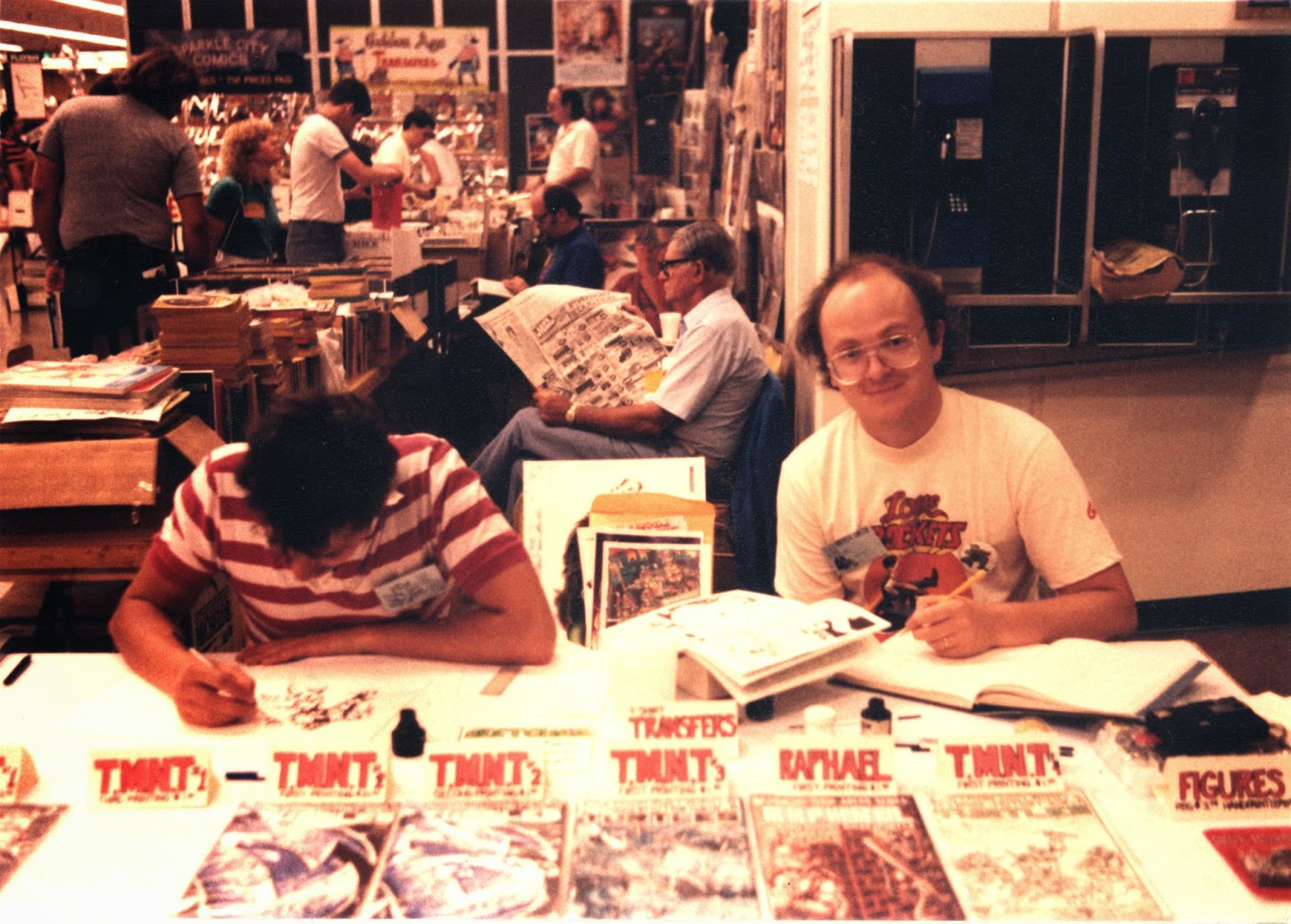 [Note: This is the second part of the "group letter" which I wrote and mailed to family members and a few friends to let them know about my first trip to the San Diego Comic Con.

The photo above is of Kevin and me at our little table in "Artists' Alley", showing Kevin hard at work on a TMNT sketch, and me taking a little break to at least look up from doing a drawing in someone's convention sketchbook.]

The first morning of the convention, Kev and I got up fairly early (7:00 AM) and had a lousy breakfast in the hotel restaurant (our first and last there). Then, shouldering our suitcases and portfolio packed with Turtlebilia, we mosied over to the convention hall, where all the dealers were busy getting set up. Just outside the hall we ran into Norman Witty (remember Omega books?), who helped us find our table, which just happened to be across from his in the dealers' room. The dealers' room was huge, and just crammed with tables filled with all the kinds of things we would have liked to have spent all three days just looking through. But such was not to be. Shortly after we had our table set up, they opened the doors to the public, and from then on we were busybusybusy!

We did a brisk business in books (we had brought with us 50 copies of each book), but were kept even busier doing sketches. We were charging $8 for a pencil sketch, $8 more to ink that in, and an additional $9 to color it. And we had more business that we could handle. I think at our next convention we will have to raise our prices even more… even though we'd like to keep the prices low so even the little kids can afford one.

That first day we got to meet a bunch of people who we had known only through their work and/or correspondence with us, including Brad Foster (who inked the first pin-up page in issue #2), Clay Geerdes (publisher of lots of "newwave" mini-comics… Kevin's first published comics work was done for him), Par Holman and David Miller (also newwave artists), Larry Marder (does a comic called "Tales of the Beanworld"), Walt Simonson (does a lot of stuff for Marvel Comics, including Thor), Dave Garcia and his wife Monica Sharp, who draw and write, respectively, a comic story called Panda Khan which is finally seeing print as a back-up story in a book called "A Distant Soil" (Dave and Monica also clued us in to the ongoing dinosaur exhibit at the San Diego Museum of Natural History… more on that later), and last but not least, Frank Miller, who came to our table to tell us how much he liked our book. (Frank Miller was one of the guys that the first book was dedicated to, and it was his style that we emulated in that first issue… the cover was in fact a parody of Miller's cover to his first Ronin book.)

We stayed at the convention 'til about 6:00P.M., then packed up and went back to the hotel. Kev and I were beat but happy (meeting Frank Miller made our day), but had enough energy to take a fifteen minute stroll down the street to a neat little place called Harbor Village, which was a collection of little shops and restaurants located right on the edge of the harbor. We ate dinner at the Harbor House, with a view of the ocean as we pigged out on seafood and other great stuff. I could barely walk when we left to go back to the hotel, I was so stuffed.

[I've forgotten a lot about our first San Diego Comicon trip, but one thing I do remember is how busy we were doing sketches. It was crazy! We would go on, as the years passed, to become more realistic and organized about doing sketches at shows, and not put ourselves in that awkward position of taking on too many sketch commissions, with full and honest intentions of drawing all of them... and then running out of time because it was impossible to predict how busy we would be doing other things, like talking with fans and selling our other merchandise. I always hated disappointing people who had asked for sketches, and I know Kevin felt the same way.

Eventually, as the TMNT thing became huge, I realized that there was never going to be a way for me to do full sketches for all of the folks who wanted them, and on top of that, there was no way I was going to be able to adequately enjoy the convention experience if I was constantly busy doing those sketches (I'm definitely NOT the fastest convention sketcher out there).

So I created a compromise which has worked pretty well -- I developed my signature TMNT "head sketch". This is exactly what it sounds like -- a quick sketch of a Turtle's head, either smiling or snarling, typically, and sometimes (especially if it is not a really quick free sketch done in someone's comic or sketchbook) with a little bit of the shell showing.

When I first started doing this, I offered them for free, as a way of letting everyone who wanted a TMNT sketch to get a small piece of art.

That quickly proved to be unworkable, because -- as I think most people who have appeared at conventions as guests or vendors (or both) know -- whenever you start offering stuff for free, the lines get long really fast. So I had to start charging for sketches, even those little ones. I think I began at one dollar per head sketch, and went from there. -- PL]