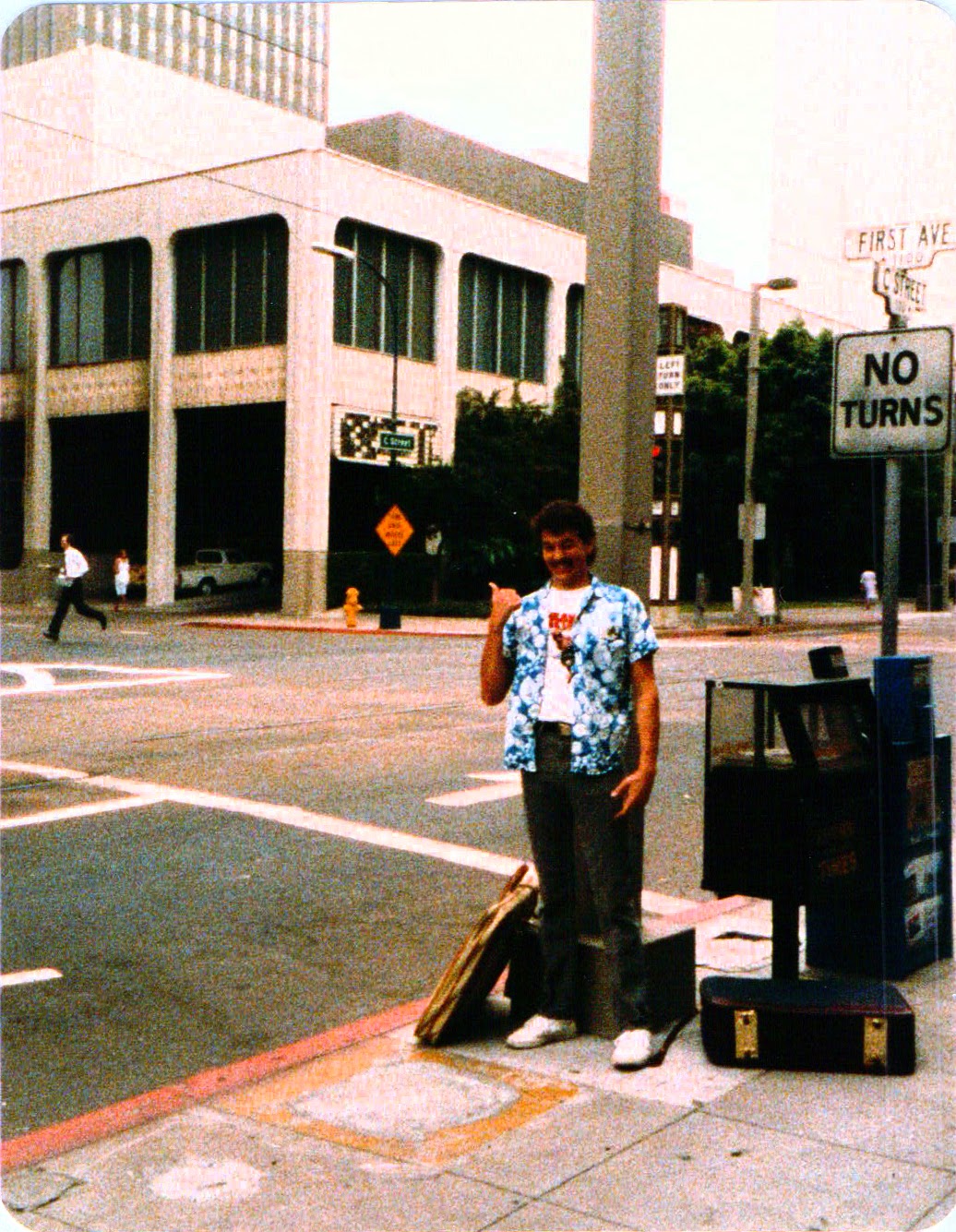 [Note: This is the third part of the "group letter" which I wrote and mailed to family members and a few friends to let them know about my first trip to the San Diego Comic Con.

The photo above shows Kevin Eastman posing across the street from the old convention center where the San Diego Comicon used to be held. -- PL]

The second morning of the convention, we decided to bypass the yucky Hotel San Diego breakfast fare and go instead to the Executive Hotel up the street, which Norman had suggested as a better place to eat. It was… the breakfast was great (albeit more expensive) and we had a nice view of the city and the bay, as the restaurant was on the 9th floor of the hotel.

Thus fortified, we made out way over to the convention hall at about 9:00, only to find that no one was being allowed in until 9:30, and the public at 10:00. I guess they were afraid if they let some dealers in earlier than others there might be some pilfering. (We didn't worry about that because we took everything with us when we left the con.) Finally, we were let in, and proceeded to set up and get down to work on the list of sketches that we had accumulated the previous day. It was getting pretty long… I think we had about sixteen people on the list at that point.

The day went pretty much as the first day. We were kept very busy selling books, signing books, talking to fans and friends, and drawing. We also actually got a chance to look around at some of the multitudinous tables full of wonderful merchandise, though there was no way we could look at it all. I picked up a couple of really neat robot models, and a few comics. I also found a table where they were selling original art by Russ Manning from a book called Magnus, Robot Fighter which appeared in the sixties, and which was one of my favorite books and a great influence on my drawing. I bought two of these pages at $65 each, though I would have liked to have bought more.

The was so much neat original art there that it's a wonder that I came home with any money at all!

We left the convention that day a little earlier than the first day, because we had made reservations to take a harbor dinner cruise. So we zipped back to the hotel, got freshened up, and walked down to the dock where the boat, a cute paddlewheel job, was moored. We had a fun time on the boat -- the dinner was mediocre, but it was neat to see the sights around the harbor, and to go up on the open top deck and catch the ocean breezes. The cruise lasted about three hours, so it was getting dark by the time we returned. One really cool thing that happened was that just after sunset, we were on the top deck when we saw a bright orange and white vapor trail appear over the western horizon and rise in the sky. When it was about 45 degrees above the horizon, it suddenly stopped and then just as suddenly fanned out in a huge bright white plume of vapor or smoke, which lasted for about another two minutes, then stopped. It was really quite dramatic, and everyone was trying to guess what it was. I thought is was a missile or rocket of some sort, and found out the next day that I was right -- it was a rocket carrying upper atmosphere sensors that had been fired from Vandenburg Air Force Base."

[I wish I had bought a few more of those Russ Manning pages! Prices sure were different thirty years ago. -- PL]
Posted by PL at 6:40 AM