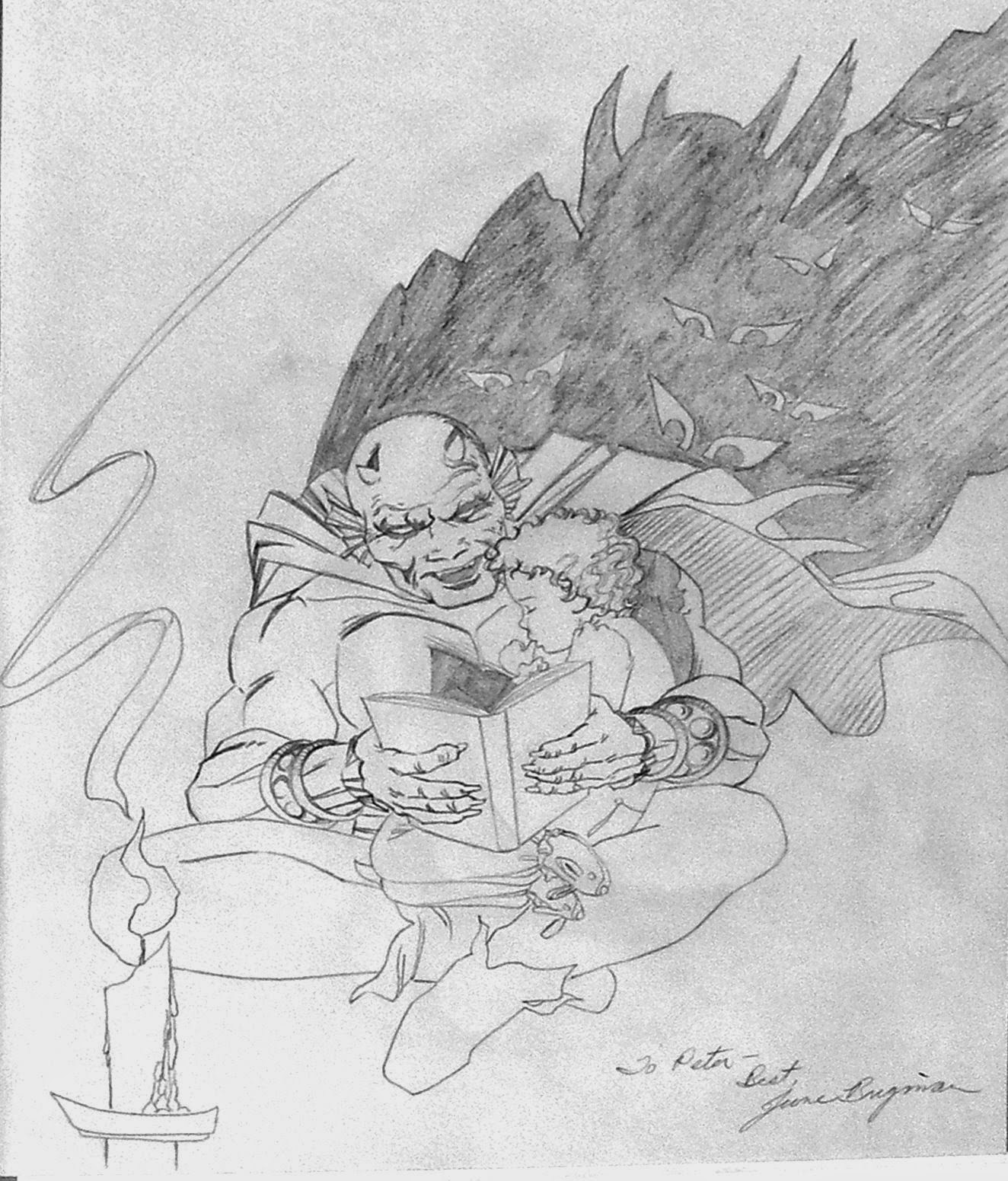 This one is from a June 7, 1986 letter to June Brigman (a very talented comic book artist):

This letter is about a month late, but then, that's the way things have been here since January. I had meant to write earlier and thank you for your hospitality to myself and MIchael Dooney when we came down to White Plains for Ted's show. The meal and the company were excellent, and I thank you.

Thanks also for the "Demon sketch -- it's a prime addition to my growing collection! As you requested, I'm sending along a copy of it for you. Again, I'm sorry it's late, but Kevin and I have been insanely busy these last several weeks, getting the artwork for Donatello, our latest micro-series, done, and doing the pencils for TMNT #8 (the Cerebus/Turtles crossover issue), along with a hundred other things… including getting ready to pack up and move to Massachusetts, which we will be doing on June 20. Yow! So much to do…

I hope you and Roy are doing well… Kev and I are looking forward to seeing you at the June 15 show in NYC. Take care!

P.S. I'm also enclosing a couple of copies of Gizmo #2, hot off the presses! and possibly some information about a new project for next year that you might be interested in."

[The drawing at the top is the aforementioned "Demon" sketch by June Brigman, originally posted on my "palblog" site, at this URL:

There are other sketches of Jack Kirby's "Etrigan the Demon" character by various artists on that blog, if you care to see them.

The show in White Plains, NY was notable for meeting June and her husband Roy, but I also recall another thing which happened there -- I saw my first attempt to create a counterfeit TMNT #1, first printing.

A kid came up to my table and asked me to sign his first printing of our first issue, but when I opened the front cover, I had to give him the bad news: Someone had sold him a second printing, with the word "second" whited out (with actual "White Out" correction paint!) and "first" written in its place.

The kid was crestfallen. I felt bad for him, but... how do you miss something like that? I mean, it was a pretty obvious, crude attempt to make a second printing look like a first.  Fortunately, that's the only time I ever ran into skullduggery like that regarding a TMNT #1 first printing. -- PL]
Posted by PL at 8:48 AM