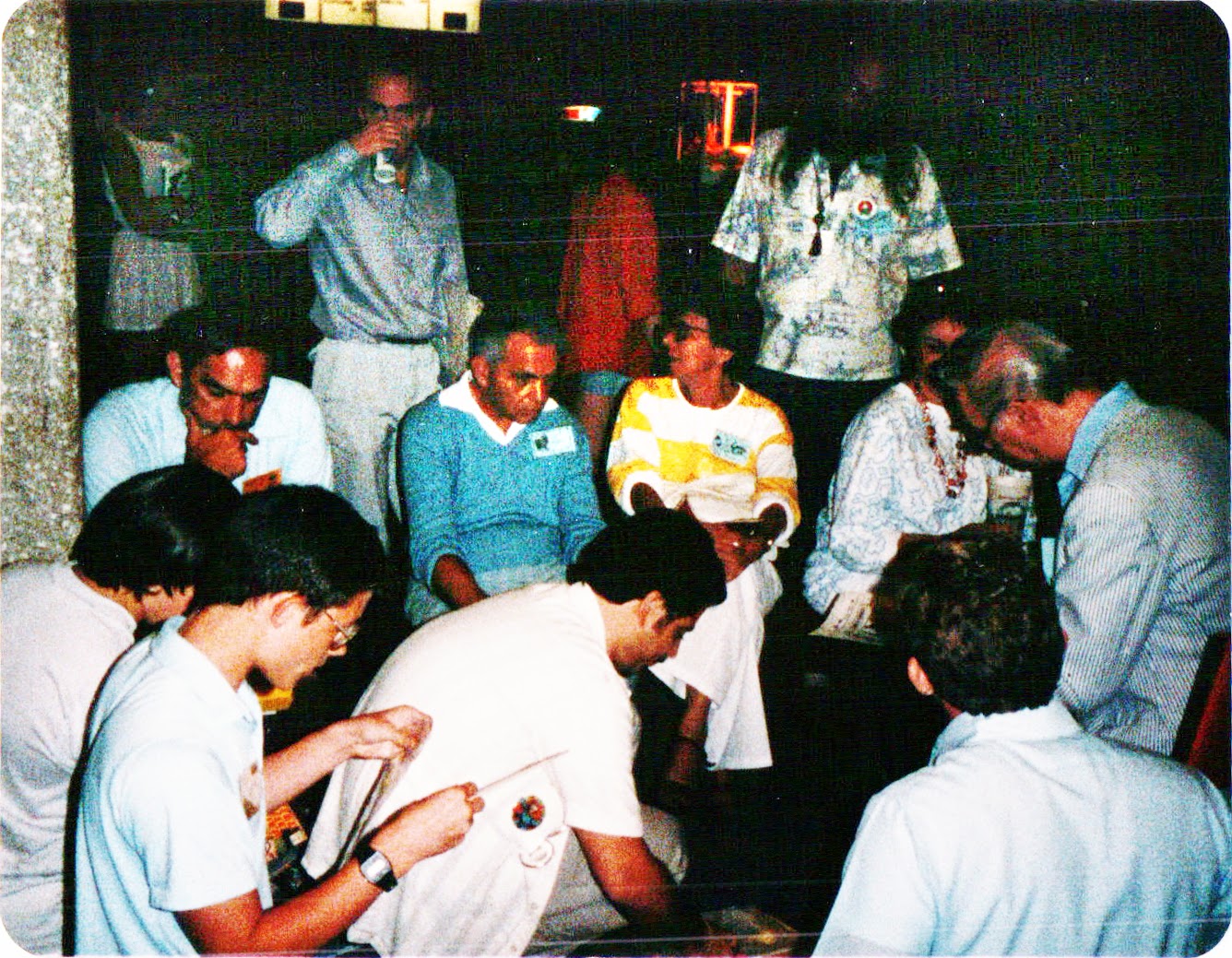 [Note: This is the fourth part of the "group letter" which I wrote and mailed to family members and a few friends to let them know about my first trip to the San Diego Comic Con.

The photo above -- sorry for the low quality of the image, but it was taken with a cheap film camera -- shows Jack Kirby and his wife Roz surrounded by fans. I'm pretty sure this was taken at the 1985 San Diego Comicon.]

The third day of the con, we agreed, would be our last, as we wanted to take Sunday off and look at some of the sights of San Diego.We tried to finish up all the sketches that we had on our list, but it was to no avail. In addition to the fact  that there were just too many on the list, we were also starting to suffer a little bit of artist burnout from trying to draw so much so fast.

We did take a little more time to look around at things, but still could not really examine all the stuff there. Kev and I picked up a few more neat things, including some more original art and books. But what really made my day was that I got to meet Jack Kirby!!! My main man, Jack "The King" Kirby! I actually shook his hand and talked to him for a few minutes, just like any wide-eyed fan. It was a thrill to hear him say that he liked our books (we had sent him copies of them), and I wish I could have had more time to talk with him, but he was surrounded by lots of people. (Jack Kirby, by the way, was probably my biggest single influence when I got seriously interested in drawing comics. He's done almost every comic character that exists, and he created the Fantastic Four, Captain America, the Hulk, Spiderman, the New Gods, Thor, Mr. Miracle, The Demon, etc. etc.. He is the King.)

We stayed at the con 'til 7:00 PM, and by that time we were really beat, mostly from trying to finish as many drawings as we could. I'm afraid we disappointed several people who ordered sketches -- we had about fourteen on our list that we just couldn't get to. At least we told them up-front that there was no guarantee that we could finish their sketches.

Kev and I said our goodbyes to the various people that we had met at the convention, and trudged back to the hotel. DIane and her friend from Los Angeles, an ex-UMie named Alison, were waiting there, ready to go out and see some sights. I begged off, preferring to mellow out that night, and I think Kev would have liked to, but he was kind of stuck. I ended up taking a leisurely stroll through the Seaport VIllage, going in lots of the different shops there and eating tacos at an outdoor restaurant. It was a relaxing way to end a frenetic day.

[It's quite evident that the highlight of my third day at the 1985 Comicon (maybe the highlight of the whole trip) was meeting -- albeit only briefly -- Jack Kirby. That was the icing on the cake.
Rereading this now, I see that to be more accurate, I should have said Jack was "creator or co-creator"  of all of the mentioned comic book characters. -- PL]